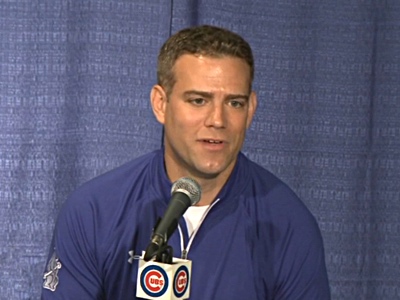 One topic that was assured in advance of being one of the biggest at the Cubs Convention is what’s going to happen this year with the man in charge. Chicago Cubs President of Baseball Operations is in the final year of his initial five-year, $18 million contract with the Cubs, but neither he nor Chairman Tom Ricketts have ever expressed anything but optimism that a deal will get done to keep Epstein in Chicago when the time is right.

That time was not the Convention, though, as no surprise deal was announced, and Epstein reiterated that it’s just not something he thinks about much right now:

As you can see in the video, Epstein believes the deal will get done some time after all of the players get their deals for 2016, and he mentions Jake Arrieta by name. Arrieta, having exchanged salary figures with the Cubs, still has to have his arbitration case settled before every in-house Cub will have his contract finished for 2016.

Perhaps then Epstein and Ricketts will get serious about banging out a deal.

Epstein said he sees himself staying in the same role “for a long time,” and I’m sure Cubs fans are happy to hear that. With Andrew Friedman resetting the executive market after signing his enormous five-year, $35 million deal with the Dodgers, Epstein figures to get an extremely healthy, and well-deserved raise.

One question that remains mostly undiscussed is when deals for various other important front office executives will be extended to ensure that they, too, will be around for a long time. On that front, we did get one nice tidbit from Ricketts when he spoke at a panel. According to Ricketts, many in the front office have already turned down opportunities for promotions elsewhere because they want to stick with the Cubs until the job is done. We’ve heard that before about Senior VP of Player Development and Amateur Scouting Jason McLeod, but it wouldn’t surprise me at all to learn that many of the bright and talented executives in this front office have been targeted for poaching.

Here’s hoping the band remains together for a good long while yet.