Designated Hitter in the National League Soon? Probably Not Skip to content 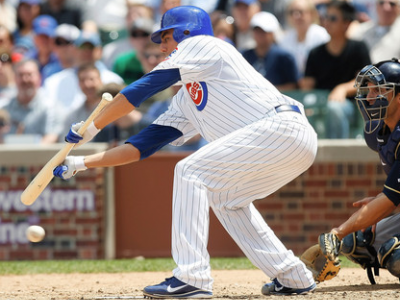 Ahh … the designated hitter. This is a debate that will remain forever and always until there’s a harmony between the rules in baseball’s two leagues.

As long as offense remains down across baseball and the Players Association is intact, the American League will never rid itself of the 15 high-paying, offensively-oriented positions. Similarly, as long as the American League is employing 15 offensively-dedicated players on the roster, there will be an unfair imbalance between the two leagues that needs to be addressed.

From my perspective, these few short sentences alone indicate the eventual adoption of the designated hitter by National League, but not everyone feels the same way, including Cubs President of Baseball Operations Theo Epstein:

Epstein: "There's no indication that a DH is coming anytime soon."

At the 2016 Cubs Convention, Epstein commented that he doesn’t see the designated hitter making its way to the NL anytime soon. At first, that was a pretty shocking sentiment. There was never, of course, any concrete indications to the contrary, but I had certainly felt that I’ve been witnessing a growing acceptance or openness to the possibility.

To be sure, Epstein hedged his statement, saying “I just think we can’t count on it …. We’re planning on building with the National League rules for years to come …. [The decision is] above our pay grade. It’s really an issue for the commissioner and the owners.”

All of this is true, but at least one rival executive, John Mozeliak, seems to see it another way.

In a few words at the Cardinals Winter Warm Up, Mozeliak – the St. Louis Cardinals General Manager – captures the feeling I’ve previously described. He opines, “there is more momentum [regarding the DH]” than ever before, and what used to be a “non-starter” is now at least becoming a topic of discussion. In fact, this article implies that the inclusion of a DH in all interleague games – regardless of the home team – has been discussed. Presumably, this would be a way to slowly bridge the gap into next CBA – where a full-time designated hitter could be more easily implemented.

But does that really make sense?

The upcoming post-2016 Collective Bargaining Agreement might already be a contentious conversation, given the recent, relatively large changes (replay) and the boiling point issues (service time, neighborhood play) already becoming focal points. Would adding another – possibly the most – divisive topic to the conversation be the best overall move for baseball? I’m not so sure, even if I think it’s best for the game, that doesn’t mean it’s necessarily best for the league right now.

One thing we do know for sure is that there is such little clarity surrounding most apparent “momentum”. Just one day after Cardinals GM John Mozeliak said he was feeling increased momentum, Cardinals President Bill DeWitt said the exact opposite. He believes the DH is a topic that will continue to boil, but that a decision this time around is unlikely, even if though it remains possible in the long term; adding, “there are other ways to get offense back in the game. We’ve got a Commissioner who’s very creative and sensitive to the needs of the game.”

There are a number of reasons why the designated hitter rule is a particularly challenging conversation, but its tie to the CBA is understated. Instead of being debated on its merits alone, the designated hitter can and will always be used as leverage between the owners and the players. At its root, the Players Association would love to add 15 high-paid positions to MLB, while the owners might – obviously – be reluctant to increase payroll. Of course, the counter argument is that the potential future gains from improved parity, more star players and increased offense should offset any loss from increased salary.

Brett has covered this topic many times before, and I think he pretty much nails it on the head. Adding the designated hitter to the national league – pretty much undeniably – will improve offense*, help keep pitchers healthy, increase general excitement, add 15 new jobs (sorta), and alleviate an increasingly obvious imbalance between the two leagues. And, on the latter, don’t sleep on the added benefit it has towards roster construction itself. The American League has always been more comfortable signing aging sluggers, because of their ability to stash their declining gloves (and bat) in the designated hitter role.

One of the few absolute certainties is that the American League will not be ridding itself of the DH, ever. It’s just not going to be something that happens. Besides the countless logistical reasons, it has become as much of a tradition for the AL as not having it has become for the NL – it’s been over 40 years!

So with that in mind, count me among the active “Designated Hitter to the National League” supporters. I do not suspect it will be something that is actually changed during the upcoming CBA negotiations, but I do expect it to be addressed. In fact, I think the “DH for all interleague games” proposal is a swell idea that could inch us closer to the next mile marker.

*As an aside, I’ve read a few articles that express the idea that a DH would be especially great for the Cubs, because Kyle Schwarber could immediately slide  into that role. To which I say: would you really want to be the guy to tell him he’s going to play less?