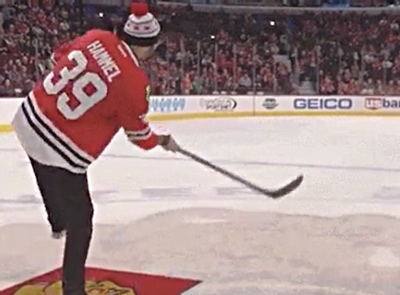 A couple weeks ago, Anthony Rizzo had some fun at a Chicago Blackhawks game, and even got the chance to take a shot at the goal from mid-ice.

Last night, Jason Hammel got a chance to avenge the collective Cubs name, and he showed Rizzo how it’s done:

Rizzo came back at his teammate, generated some fun ribbing on Twitter:

RESPECT. U've seen my moves in the post-game celebrations. Not so pretty. Gotta leave u some of the love… https://t.co/OjjLVG7y8U

Hooray for sports and friendship!