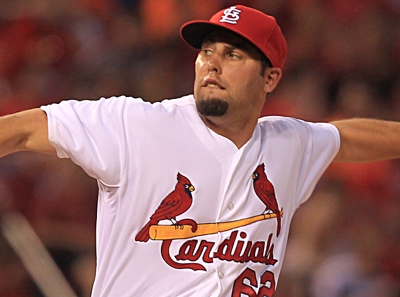 When the Cubs signed Jason Heyward and John Lackey, Cardinals fans were decidedly bummed. Often, their “depression” reared its ugly head with denial, hatred and denouncement of the actual talent or skill of either player. But if Cardinals fans were bummed before … woof, today’s going to be a hard day.

While I kid, of course, about the depth of Cardinals fans’ struggle to accept the reality, the Cubs really did sign Nick Greenwood.

Greenwood, 28, is a lefty reliever that was originally drafted by the San Diego Padres in the 14th round of the June 2009 amateur draft. Greenwood was later traded to the Cardinals as part of a three team deal between the Cardinals, Padres and Indians in 2010 – a trade that included Ryan Ludwick, Corey Kluber and Jake Westbrook.

Starting out in St. Louis’ Low-A affiliate in 2010, Greenwood made his way through the minors until his Major League debut in 2014. In 36 big league innings out of the Cardinals’ bullpen, Greenwood had a 4.75 ERA (4.49 FIP), which, admittedly, doesn’t look great.

Still, despite an ugly surface, there are some things to like about Greenwood’s upside. For example, in that short stint in the majors, Greenwood kept an excellent 58.7% ground ball rate and was plagued by an unusually (seriously) high home run/fly ball rate of 17.9%. Also, he essentially never walked anyone (3.5%), but, unfortunately, he rarely struck anyone out, either (11.7%). Still, his major league xFIP (3.65) could indicate more is under the surface. Greenwood also held lefties to a mere .266 wOBA.

In 2015, Greenwood pitched almost exclusively at AAA for the Cardinals, moving between the rotation and the bullpen, and posting a 5.79 ERA and 4.98 FIP over 129.0 innings.

It might be quite some time before we figure that out for ourselves just what Greenwood has to offer. According to Steve Adams (MLBTR), Greenwood’s minor league deal does not contain an invite to Spring Training 2016. Instead, then, it is expected that Greenwood will head to AAA Iowa, to regain his form, work his way back to the Majors and act as extreme depth in case of a rash of Major League injuries.

In case you were wondering, Jed Hoyer wasn’t hired as the Padres GM until several months after Greenwood was drafted, so that’s not necessarily the connection, there. Instead, I think his impressive ground ball rate and LOOGY splits might have been the impetus behind the low-risk move. Given Joe Maddon’s, let’s call it determined, use of Brian Schlitter (and his huge ground ball rate) last year, perhaps the front office was looking to add a pitcher cut from the same cloth, at least for depth.

So, I’m sorry Cardinal fans. Nick Greenwood is now a Cub. And with any luck, his departure will hurt as much as the first two.