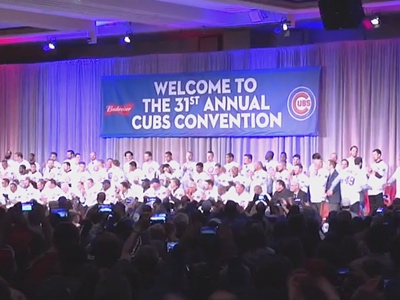 While the 2016 Chicago Cubs Convention was occurring earlier this month, the St. Louis Cardinals held their own fan festival 300 miles south. Similarly to CubsCon, the “Winter Warmup” is a collection of Cardinal executives, coaches and players, both old and new. It provides an outlet for fans to get autographs, ask questions, get excited for the season.

… And to become nervous about the Chicago Cubs.

When asked about the National League Central and, more specifically, about the increasingly impressive Chicago Cubs, Cardinals manager Mike Matheny responded with, “Who’s that?” (Post-Dispatch). A response that was met, of course, with cheers and applause.

But according to Derrick Goold, the Chicago Cubs name was one that was repeated – a lot – at the Winter Warmup. Instead of the usual mocking or “humble superiority,” the panels were apparently filled with acknowledgment of the Cubs’ talent and 2016 expectations/projections. In fact, the fans frequently resisted calling them by name, instead referring to the Cubs as “the team up north.” To which I immediately assign the “He-who-must-not-be-named” Harry Potter comparison.

And can I just say, I love that the Cubs are the “bad guys” – the ones that are expected to win. I love that they have a big name manager, huge free agents, star power veterans, exciting young players and a remodeled stadium.

Lofty expectations? That’s someone else’s problem. Let’s let the other NL Central teams worry about how good the Cubs are going to be. I’m going to continue enjoying it and pretend that no one else exists.

There were certainly other reasons to hate the Yankees of 90s and 2000s (or even the Cardinals of the 2000s and 2010s), but the reason you hated them the most was because of how good they were. They were a powerhouse, they were intimidating, they expected to win and they followed through.

Last year was only the beginning of a new era for Chicago baseball. The Cubs are coming, and everyone knows it.