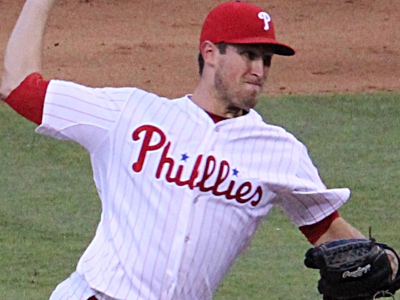 So who is Pettibone?

The righty, still only 25, missed all of 2015 after undergoing a second shoulder surgery. He was never seen as a high-upside pitching prospect, but Pettibone had the kind of tools for a pitcher deemed to have a high-floor.

Here is an excerpt from Baseball Prospectus from before Pettibone’s 2013 debut:

“His above-average command allows his deep arsenal to play up across the board. He locates his hard sinking fastball well, as it sits in the 91-92 mph range and can touch 94 when he reaches back for more. His 6’6” frame and high three-quarters arm slot allow him to gain good leverage on his pitches. Pettibone added a cut fastball to his arsenal last season, and there were flashes of effectiveness, giving him a sharper, more consistent pitch with horizontal movement. His slider is a bit softer than his cutter but can still be an average offering at times. Pettibone’s best pitch is a plus changeup that has excellent deception and can miss bats when set up properly.”

Pettibone was a third-round draft pick out of high school by the Phillies in 2008 and was slated to attend the University of Southern California before signing with Philadelphia. He had a steady, traditional climb through the Phillies’ minor league ranks until 2012 when he split the season between Double-A Reading and Triple-A Lehigh Valley.

He ranked fourth on Baseball America’s list of the Phillies’ top prospects after the 2012 season and made his big league debut on April 22, 2013, striking out six and walking no batters in 5.1 innings in a Phillies win against the Pirates.

It was the first of 18 starts for Pettibone as a rookie, but it was an injury shortened season for the right-hander who was shutdown that season because of a strained right shoulder.

Shoulder problems continued to pop up for Pettibone. He felt discomfort in his shoulder during spring training in 2014, which kept him from competing for a spot in the Phillies’ rotation. He made a few spot starts in place of Cole Hamels, who was recovering from an injury of his own, but was returned to the minors where he would pitch through a labrum tear before being shut down for rest. It marked the third time in less than a year in which he had to be shut down because of the shoulder injury.

The Cubs have gone out of their way to give themselves a fighting chance by adding organizational depth in the pitching department. A pitcher like Pettibone isn’t going to wow anyone, but arms like his are worth nursing back to full strength and taking a chance.

For his part, Pettibone continues to work:

Ready for a big 2016 season pic.twitter.com/CbvQi5voov