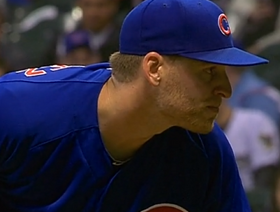 I’ve been relatively open about my desire to see the Cubs go after one more late inning reliever for 2016. We can debate the inherent value or necessity of such an addition, but it just so happens to be where I stand. As of now, the Cubs have plenty of depth, and I truly do like their options, but adding a consistent, dependable, late-inning arm – possibly a guy with multiple years of control left – is the easiest way, that I can see, to put the Cubs over the top.

The thing is, the Cubs might already have that very guy and he might not even make the team: Neil Ramirez.

Neil Ramirez will be, without a doubt, one of the toughest roster decisions this upcoming spring. Not only are there health questions and a very crowded bullpen, but there’s also the matter of minor league options – Ramirez is out of them. If he doesn’t make the big league team out of Spring Training, he has to go on waivers before the Cubs could send him to Iowa.

If you recall, Ramirez was a huge part of the 2014 bullpen and figured prominently into the Cubs future plans. In fact, he was one of the best relief pitchers on the Cubs that season.

In his 43.2 innings out of the 2014 ‘pen, he finished with the lowest ERA (1.44) and third most WAR out of the reliever corps. Heading into 2015, then, he was counted on as a consistent, late inning reliever, but that never came to be. In fact, 2015 was mostly lost due to some early April shoulder inflammation.

Missing time from April 15 until June 28 (as well as other shorter stints later in the season), Neil Ramirez managed to finish just 14 innings last season. While his results on their face looked good, 3.21 ERA (3.21 FIP), they were a lot more concerning the deeper you dug (4.07 xFIP, K rate down, BB rate up). Worse, his velocity was down roughly 2 MPH, and both he and his stuff didn’t look like the dominant, back end reliever the Cubs had relied on the year prior.

But Ramirez did finish the season healthy and I’m told he’s already been working out at the Cubs facility this winter. But healthy or not, where does that leave him on the roster? Let’s take a very preliminary look at the expected bullpen – all things equal – and see where he could fit.

By my count, assuming health in the pen and the rotation, the Cubs bullpen has seven near-locks:

For better or for worse – and frankly, most are for better – that’s the Cubs bullpen on paper. Most bullpens carry seven relievers, and, if those were the Cubs’ seven, I’d be happy with it. But for nearly all of last season, the Cubs carried eight pitchers in the pen. To be sure, some of that was due to the revolving door of the fifth starting position, as well as the short outings of Jason Hammel and Kyle Hendricks, but I’d expect (and argue) that the Cubs should carry eight relievers once again. With the increasing versatility of the roster, the bench can be a player shorter than the norm, without being a logistical problem.

So, if there is one more spot available, is Neil Ramirez the guy? He certainly feels like it, but let’s take a look at some of his realistic competition on the 40-man roster:

I won’t dig too deeply into any one of the options, but each pitcher listed above carries a very real opportunity to be the 8th man in the pen. To be sure, it’s a fair bet that many of the six above will appear in relief for the Cubs this season due to injuries, ineffectiveness or otherwise, but that’s an entirely different conversation. If we’re assuming the Cubs are lucky enough to make it out of Spring Training with their bullpen healthy and ready to go, is Neil Ramirez really the clear option?

Maybe. I’m not quite sure.

In my mind, the bullpen is broken up into two groups of seven pitchers. For the players I pegged for the pen, a spot on the 25-man roster out of Spring Training is their job to lose. For the remaining six players and Ramirez – plus the inordinately large group of really interesting arms in on minor league deals – they will have to fight for the remaining one spot. Still, you can bet the Cubs would love Ramirez, 26, to take the job and run with it.

Ramirez has been a highly thought of prospect, has proved himself at the Major League level and isn’t even eligible for arbitration until 2017. If he could put it together and complete another healthy, effective season, the Cubs will have added to their impressive collection of young talent under control until 2021.

For what it’s worth, Steamer projects Ramirez to reach just 35 innings pitched in 2016, but with an extremely useful 3.39 ERA. During his breakout in 2014, Ramirez was one of the nastiest, most impressive relievers that I’d seen. If he can somehow figure out a way to come back soon and reclaim some of that talent, he might be the piece to put the Cubs over the top in 2016.