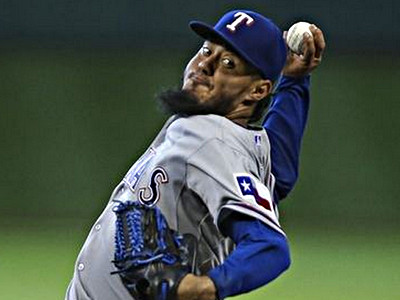 As we discussed this morning, Dexter Fowler’s bid for big money in free agency has clearly been harmed by his attachment to draft pick compensation. You would definitely include fellow free agent Ian Desmond in the harmed-by-qualifying-offer group, and, on the pitching side of the ledger, you’d have to bring up Yovani Gallardo.

Although just 29 and coming off of a 3.42 ERA season in the AL, Gallardo never looked like he was going to get a monster contract thanks to ever-dwindling peripherals. Still, he rejected a one-year, $15.8 million qualifying offer from the Rangers back in November, and has been hanging out in free agency ever since.

As reports have it, Gallardo may finally be looking at landing a deal. Ken Rosenthal first reported that the Orioles were speaking with Gallardo, and Jon Heyman subsequently said that the sides were “moving close” to a contract, which could be for three years.

Given the proliferation of creative contract structures this offseason, I wouldn’t be surprised if it’s not quite a strict, three-year guaranteed deal. Heck – unless Gallardo is taking a low annual amount, I’d be surprised if he got three guaranteed years at all.

There was a time when Gallardo was mentioned together with the Chicago Cubs back at the Trade Deadline and then again earlier this offseason. I’ve never been crazy about the fit thanks primarily to a really troubling drop in his strikeout rate over the past half decade, but if he was going to wind up signing for a song, you never wanted to rule anything out.

In any case, it sounds like it’ll be the Orioles taking a chance on Gallardo, and maybe getting a bargain in the process if his performance can continue to defy our expectations.

If the O’s do wind up signing Gallardo, it’s going to cost them their first round pick – 14th overall – to do it. Yet another reason to suspect that whatever deal Gallardo signs, it might be for a very low AAV.

And if the O’s do wind up trading that 14th overall pick for the right to sign Gallardo, they might strongly consider going after another qualified free agent like Dexter Fowler, who fits their needs in the outfield, and whose effective cost to them would drop down to their compensatory pick after the first round (plus his contract). That’s just me speculating, mind you.

The draft pick cost of grabbing both Gallardo and Fowler at this stage would be significant, but it might be worth it to the Orioles, who can very much compete in the AL East, and might get both players for well under $50 million total guaranteed.

Previous rumors, for what it’s worth, had the O’s out on Fowler, unwilling to part with their first round pick to sign him. But if that pick cost drops? I wonder.