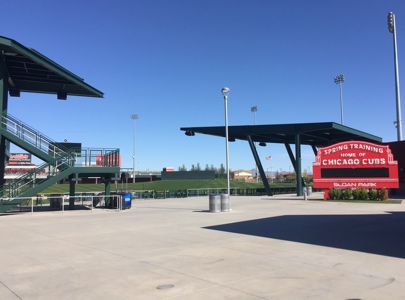 Today was the first full workout day for the Chicago Cubs, and I can tell you that the place was packed … with fans! The turnout of folks hoping to see just a tiny bit of practice today was incredible. There were more people, by far, at the backfields today than any day I saw last year, including the days when minor league games were being played at those fields.

Excitement about the 2016 Chicago Cubs is already exploding. We’ll all have to pace ourselves.

But, then again, there’s fun to be had! So, then, enjoy some fun, including some things I was able to grab after speaking with Tom Ricketts …

Atmospheric shot of how well-attended Cubs BP was today. Doesn't do it justice. pic.twitter.com/E2SbGr0paU

Albert Almora is a lot bigger and stronger than you may have thought. pic.twitter.com/lTciwcZIwP

Munenori in the house:

A little Spring football? Sure, but it kinda looks like Lester floated this one:

How about Arrieta’s long bomb:

Got a Matt Murton shot today, so I guess I did all right. pic.twitter.com/V8aXn8x3d8

But Mark Gonzales’s shot is better and more interesting:

Jason Heyward is popular among his teammates and coaches, so why not the fans, too:

Ryne Sandberg was around today:

Does this count as #SquadGoals: