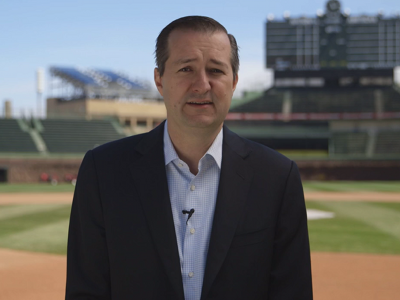 Chicago Cubs Owner and Chairman Tom Ricketts was at Spring Training today, meeting with management, players, media, fans, and – as the case would have it – bloggers. Part of the reason I came to Arizona this week was to meet with Ricketts, together with a few other alternative media writers – bloggers, if you prefer the term – for a Q&A.

Before meeting with us, Ricketts met with the traditional media and got into some important topics. You can read up on his comments here, here, here, here, here, and here, among other places. Three of the big items he discussed then (so I wasn’t looking to duplicate those conversations later when we met with Ricketts) included Theo Epstein’s contract status, those Donald Trump remarks, and the state of the Cubs’ payroll.

The short version of Ricketts’ comments on those items (for longer versions, including more topics, check out the articles above):

After meeting with the media, Ricketts sat down with us for an additional session. Among the things he discussed: