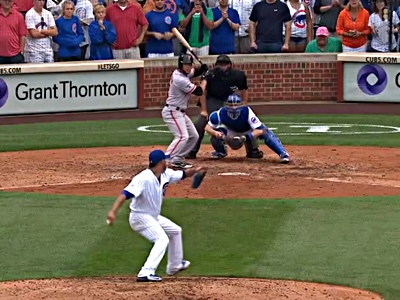 This offseason, the Cubs spent more than $270 million (plus retained Dexter Fowler) with an eye toward reinforcing a 97-win team that won the Wild Card and beat the team with the NL’s best record en route to an appearance in the NLCS.

The front office addressed the offense’s propensity to strike out and settled the outfield’s defense with the additions of Ben Zobrist and Jason Heyward. The pitching staff added depth with super utility pitchers and reclamation projects who have upside.

However, there is one thing the Cubs did not specifically address in the offseason.

One thing missing from the pitching staff that reported to camp last week was an additional late-inning reliever with experience closing out games.

Everyone knows Hector Rondon, who turned 28 yesterday, is ensconced as the closer right now and is expected to continue to be fantastic in that role. But it is a bit odd to see the Cubs enter Spring Training with no traditional fall-back ninth-inning guy, considering they brought in that particular type of pitcher in prior offseasons when they signed Kyuji Fujikawa, Jose Veras and Jason Motte.

The only player who resembles that might be Rex Brothers, a lefty with his own fair share of risk, upside and closer’s experience who the team acquired in a November trade with the Rockies.

In 2015, Motte signed up to be the security blanket for closer Hector Rondon. Motte ended up closing some games for the Cubs while Rondon fine-tuned some things, simultaneously working in hit-leverage situations outside of the ninth inning.

Brothers saved 19 games for the 2013 Rockies, but has not earned a save in 91 appearances (66.2 innings pitched) since. It’s been a while since he’s been that guy. Like Motte, though, Brothers comes to the Cubs with a background in closing games after a down season. Still, even with his experience, Brothers – a reclamation project in his own right – is far from a lock to break camp with the Major League team. He still has to prove himself over the 2014-15 hump, and be better than the other arms he is competing with in Arizona.

In-house, the Cubs could use high-leverage guys like Pedro Strop or Justin Grimm as the closer if a need developed – or maybe even guys like Travis Wood or Adam Warren – but they don’t have much in the way of experience there, and sometimes the 9th inning really is different.

All that said, not having an obvious fall-back option to take over as closer in a pinch is not necessarily a problem for the Cubs, especially at this stage of the season, and with the quality (and quantity) of arms the Cubs brought in to compete for jobs in the bullpen.

There were rumors throughout the offseason that the Cubs were going to try and bring in another late-inning arm, perhaps one with closing experience, but that never came to pass. Experience isn’t always necessary, but a known commodity at least provides an obvious fall-back option who could put some minds at ease.