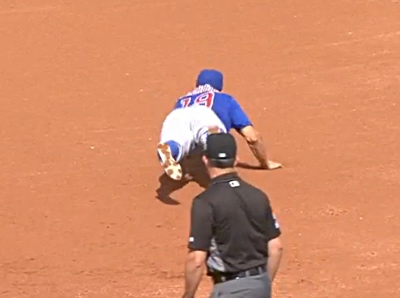 It’s early on a Monday morning, and you deserve to see a nice defensive play to start your day.

If you didn’t catch the game yesterday (and Dexter Fowler’s monster blast or Jason Heyward’s laser arm), you missed a really nice play by utility man Kristopher Negron at first base:

Although the play was really nice, it was also unsurprising for Negron, who is excellent with the glove. He can play everywhere on the field, and I mean everywhere – despite appearing in just 96 big league games between 2012 and 2015 with the Reds, Negron managed to appear at every single defensive position except pitcher and catcher. If he had the bat to match, it’s pretty clear he would have carved out a nice career as a super utility man.

It took Negron nearly 10 years to reach the Majors as he worked his way up the Red Sox and then Reds organizations, and it looked like he may have found his niche in 2014 when he played well defensively everywhere, hit .271/.331/.479 over 49 games, and was worth 1.8 WAR despite having just 158 plate appearances.

As things stand, Negron projects to be defensively-inclined utility depth for the Cubs at AAA Iowa this season.