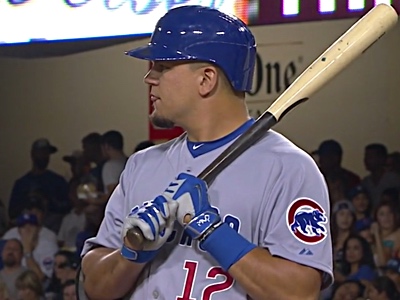 Although he’s been out for a few days with a minor knee issue, suffered on a beautiful throw in from the outfield, Kyle Schwarber is expected to return to the lineup today.

That affords us an opportunity to discuss something we didn’t necessarily get into too deeply (outside of a stray conversation about extreme outfield shifting) upon the outfield-changing signing of Dexter Fowler: the signing’s impact on Kyle Schwarber’s defense in left field.

Schwarber was mostly fine/adequate on defense during his time in left field last season, but, unfortunately, the NLCS has clouded the memories of many. If you recall, Schwarber misplayed two balls – rather dramatically and in short order – during one of the biggest Cubs games of our entire lives (Paul Sullivan writes about it, here).

Schwarber freely admits to having misplayed both, but argues that two bad plays could happen to anyone. It just so happens, as Schwarber puts it, a lot more people saw his that day.

Of course, if you were paying attention throughout the second half of the season, you’ll know that Schwarber was mostly steady in left field and Theo Epstein agrees. “I think there’s a pretty widespread misperception out there because of the two balls he misplayed in the NLCS that he’s a well-below-average left fielder,” Cubs President Theo Epstein said, per the Chicago Tribune, “I think that’s way off. I thought he played solid, average left field for us up until that point.”

Now, before Dexter Fowler signed with the Cubs, Schwarber was scheduled to set up camp in left field, next to Jason Heyward in center and Jorge Soler in right. Had that been the case, Heyward would have had quite the responsibility in center field, as both Schwarber and Soler are not known for their excellent range in the outfield. Usually, if there’s just one below average outfielder in either corner, you can have your center fielder shade one way or the other, to make up for the otherwise lost ground. Flanked by Soler and Schwarber on either side, though, Heyward would not have had such a privilege.

But now that Dexter Fowler is in the fold and back in center field, Heyward can move back to the more familiar right field – where he’s won three gold glove awards in the past four years – where he’s known, perhaps most notably, for his excellent range. With the best right fielder in recent memory standing in right field, Fowler will have far less ground to cover in right center. That will allow him to shade to left – when the batter and situation call for it, of course – helping Schwarber to cover more ground in left-center.

Here's a #statcast breakdown of the #Cubs OF range assuming Schwarber LF, Fowler CF, and Heyward RF. Not too shabby pic.twitter.com/W1M3rp9xTC

From (the since closed) Grantland, comes an excellent piece on Schwarber’s future defensive position, written by Ben Lindbergh. Digging in from scouts and player evaluations from both sides of this debate, Lindbergh paints a picture of the consensus around the league. The spectrum ranges from extreme pessimism (an AL scout thinks he is currently “unplayable” in left field), to pleasant optimism (Keith Law has “zero doubt he can play an average left field”). The truth is probably somewhere in the middle – which is just about where the Cubs say he is: with hard work, he can play average left field defense.

One scout in particular, had an unexpectedly prescient quote on Schwarber’s chances of sticking in left: “Probably not playable unless you have two CFs playing the other two spots.”

The article at Grantland reveals other reasons for optimism, with some simple defensive metrics. You should know that there isn’t a very significant sample size yet, but the early returns are pretty encouraging. Per Lindbergh, Schwarber’s arm strength in MPH (91.9), is a good deal stronger than the average left fielder (87.1 MPH) and is above average for either corner (89.3 MPH), as well.

His average first step (.55 seconds) is just a tad below the average left fielder (.53), but his average route efficiency (86.1%) is above average (85.5%). Even his average top speed (14.0 MPH) is essentially league average for left fielders (14.1 MPH) – which shouldn’t be a surprise given what we know about his athleticism. There is plenty more in the Grantland article, including more quotes from scouts that think he can handle left field as well as a similar analysis for making a career behind the plate. Check it out.

I think it’s fairly clear that Schwarber’s defense in left field isn’t nearly as bad as many are suggesting.

As I’m sure you’re aware, I’m not a scout, but I did watch just about every single inning Schwarber played in left field last season and I’m guessing a lot of scouts did not. I will never say he actually played well in the NLCS, because that isn’t the truth, but that doesn’t mean it is necessarily indicative of his true level of performance. Unfortunately, when you have a big frame like Schwarber and several misplayed balls on an enormous stage, people are going to draw conclusions.

The problem with those conclusions is that they are mostly based on outlying performance and little knowledge of a surprisingly athletic individual hidden in a traditionally less athletic frame. When you combine what we about his athleticism, character, NLCS misconceptions, advanced stats and otherwise, you’ll agree that Kyle Schwarber will do just fine as the Cubs left fielder in 2016, especially with quality outfield defense around him.