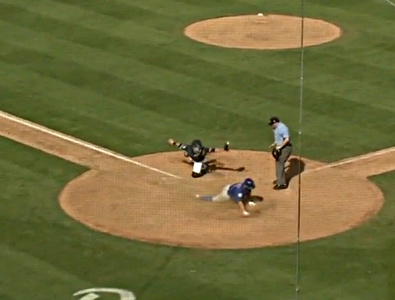 In the pantheon of homers, I think of three types – very broadly speaking – as the best kinds:

You pretty much cannot have an inside-the-park homer without some kind of crazy carom in the outfield, and this one was kind of significant, but not so significant that it’s a homer if Andreoli isn’t fast and busting it out of the gate.

Incidentally, that homer was Andreoli’s third of the spring after hitting just eight in his entire minor league career to this point (more than 1700 plate appearances). That’s probably more of a small-sample, spring fluke than anything, but it would be nice if Andreoli had legitimately added some power. He doesn’t need to hit homers to be a successful big league reserve outfielder, but having enough power to keep defenders and pitchers honest would go a long way to helping his overall offensive performance at the next level.

A long-time Luke favorite, Andreoli is hitting .364/.400/.864 on the spring (with 10 Ks in 24 plate appearances – may he really is going for more power) after posting a very solid .277/.372/.401 line at Iowa last year after methodically working his way up the system. He’s got speed and plate discipline, and can play all over the outfield, so, in that respect, Andreoli has the skill set you’d look for in a nice 4th outfielder.

The power really will be the question, as is so often the case for players with good contact skills and a high walk rate in the minors.