Early Signals About the Batting Order, and How About Ben Zobrist Batting Third? Skip to content 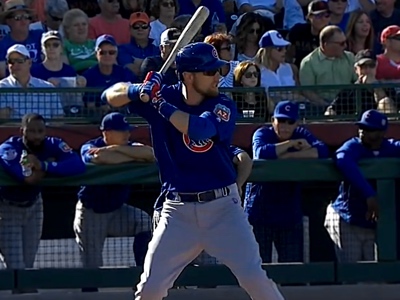 Change is the only constant.

With less than two weeks to go until Opening Day, the Chicago Cubs lineup is beginning to take shape.

And, after a series of interviews with the Chicago Tribune and CSN, for two, Joe Maddon has begun to discuss the development of that lineup and what shape it might take on that first night in Anaheim.

But before we get into any of the particulars, we should pause and remember one important thing about the Cubs’ manager: after a full season with Maddon directly under our collective nose, we know better than anyone that the lineup out there on Opening Day will change a thousand times over throughout the course of the season.

And that’s the only thing we know for sure.

Still, there are plenty of trends and general truisms of any managers lineup, and those are as important and fun to discern and dissect as the literal order, itself. For example, we’ve already learned that Addison Russell is probably moving up in the order, as his bat continues to develop AND that the pitcher is going to return to the ninth spot in the lineup with greater frequency over 2015.

But thanks to some new information, light has been shed on the rest of the lineup, and it’s beginning to take form from the middle out. Reports from Patrick Mooney (CSN) and Paul Skrbina (Chicago Tribune) suggest that Ben Zobrist could regularly hit third in the lineup in 2016. Which might take you aback, as traditionally, the third spot in the lineup is reserved for a team’s heaviest hitter, which is not Ben Zobrist, at least among this group.

But, well, we all know Joe Maddon’s thoughts on tradition. “And then the theory of hitting your best hitter third … and what I’m finding out a lot about,” Maddon told the reporters, “is the third-hole hitter comes up a lot with two outs and nobody on. So why would you want to put your best hitter there?”

In this article at FanGraphs, Bill Petti shows how teams have been hitting their best batter third with extreme consistency for over forty years. But, as Petti explains, in an optimized lineup, the three-hole should actually be reserved for a team’s fifth best hitter. Of course, as we know, even optimized lineups only offer marginal gains, but an advantage is an advantage, and you take them where you can. The problem is that hitting your best batter third is something we’ve all grown accustom to, and is undoubtedly the reason for your reluctance right now. But, like Joe Maddon, we need to keep an open mind and see what else is out there.

After all, he did last year, and it seemed to work out just fine.

And it’s not as though Ben Zobrist is a slouch offensively. Last season, he hit .276/.359/.450 with a strikeout rate (10.5%) lower than his walk rate (11.6%). He added 13 home runs and 56 RBIs, all with a BABIP (.288) that is lower than his (and the league’s) average. Of course, he could also be a switch-hitter sandwiched between two lefties (presuming Jason Heyward hits ahead and Anthony Rizzo hits behind), which will be a nightmare for opposing managers.

But, if you’re still feeling reluctance about going this route in the lineup, there’s even more to understand. First and foremost, Joe Maddon may be one of the most effective people (not just managers) in the game in blending the differing values offered by traditional scouting/baseball experience and advanced analytics/statistics. He toes the line between the two worlds, not for diplomacy, but to actually find the best balance of both for any related decision – lineups are no exception.

“I’m getting all this different information,” Maddon said, via Patrick Mooney, “The human component [is] in this whole thing …. All this stuff matters. I don’t care what anybody says – it matters. And if you can’t quantify it, it doesn’t mean it’s not there. It’s there. It’s in the dugout on both sides.” Later, Maddon address that his lineup will change with a great deal of frequency and even the reasons for the changes can vary day-to-day.

On Tuesday, we may have even gotten a glimpse of what the 2016 lineup might look like, as the regulars took the field with a top five of:

We already know that the pitcher will bat ninth, and Russell will move up to seventh or eight, but we’re getting to know more and more every day. It’s fairly safe to assume that Dexter Fowler will lead off most of the time. If Zobrist slots in at three most of the time*, you might point to that five right there as your typical top five.

In fact, it makes sense traditionally (who can argue with Jason Heyward hitting second and Anthony Rizzo cleaning up) and analytically (Zobrist in the three hole, Fowler and his OBP leading off).

So, we might not know exactly how the entire order will shake out, but we’re chipping away at Maddon’s thought process day by day. Ultimately, with a lineup full of those guys up there, anything works for me. And, as I said at the outset: it’s probably going to change a whole lot anyway.

*Of course, on Thursday, against a lefty starter, Zobrist batted fifth, swapping places with Bryant. So maybe that’s another clue.