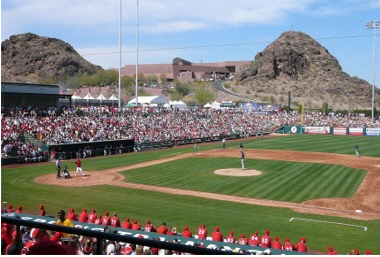 It’s an Opening Day teaser for the Cubs and Angels, as the former heads out to take on the latter at their place.

Kyle Hendricks starts for the Cubs, and, if the pattern with the rest of the rotation this turn through holds (except Jon Lester), Hendricks will get lit up, and the fretting will begin. To date, Hendricks has been fantastic this spring.

Jason Heyward gets another start in center field in the absence of Dexter Fowler, Ben Zobrist starts at shortstop in the absence of back-up shortstop Javy Baez, and Tommy La Stella starts at second base. And, despite all that movement, no Kyle Schwarber, no Fowler, and no Addison Russell … this still looks like a nice lineup.

Today’s game will be broadcast by the Angels, so you can watch on MLB.tv, and you can listen at MLB.com or via the AtBat App. For future reference, you can check which games will be televised here.