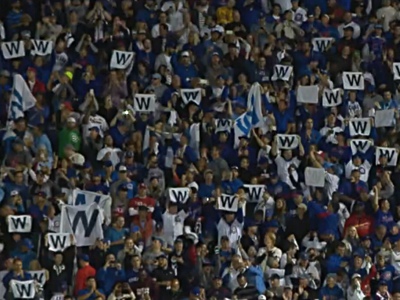 Sick kids home with me today: 1.

Caffeinated drinks before 8am: 2.

Feels about last night’s game: all of them.

It’s actually embarrassing to admit how much of an impact the outcome of last night’s game has on my psyche and ability to get up-and-at-em today. If the Cubs had lost a close one last night, I can tell you, I’d really be dragging today. But a 9-0 win? A game where it didn’t even seem like the Cubs were blowing the Angels away, and instead just felt like they were doing their thing (which happened to result, almost by magic, in a 9-0 win)? Man. I tell you what. I’m feeling good.

#Cubs RHP Jake Arrieta has gone 17 straight starts without allowing more hits than innings pitched. Think about that for a while …

Meanwhile, back at Wrigley, BN'er Dave passes on that the marquee is getting ready to go back up. pic.twitter.com/b3anEw7tM6