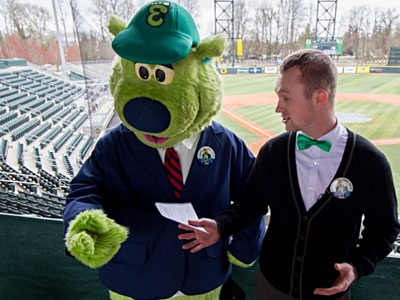 We’re going have plenty of time to discuss the Kyle Schwarber injury and what it means to the Cubs, so I’m not going to get into here. In fact, I think we could use a distraction from that unfortunate event. Something different. Something … novel.

Sluggo, in case you’ve forgotten, is the thoroughly awesome mascot of the Short Season A Eugene Emeralds, the Cubs’ affiliate in the Northwest League.

Surprisingly, so far as I have been able to tell, Sluggo might actually qualify for the job. I’m no expert on Oregon election laws, but according to the city charter (yes, I read it solely for the sake of writing this), the Mayor doesn’t actually have to be human. The question of species never comes up.  In fact, the charter contains surprisingly little about the qualifications to run for Mayor at all, but from what is there I think Sluggo qualifies. All he has to do is get twenty five signatures and he’s on the ballot. I’d be very surprised if Sluggo can’t get twenty five signatures. And once he got on the ballot, how do you vote against a… guy?… who has literally fought Darth Vader?

And I honestly have no idea where to go with this. So, before it gets any more weird, I should probably move on.

Somewhere here is an awesome TV series, but I’m not writing it. Yesterday’s games, on the other hand, those I will write about.

Triple A: Iowa Cubs
Round Rock 4, Iowa 3
The heart of the order had a nice game. The rest of the lineup, not so much.

Double A: Tennessee Smokies
Mobile 2, Tennessee 1
A tie game going into the eighth turned into a narrow loss.

High A: Myrtle Beach Pelicans
Frederick 7, Myrtle Beach 5
The Pelicans kept this one close, but three unearned runs proved to be the difference.

My campaign manager is letting me release one of our new campaign posters! What do you all think? pic.twitter.com/Eg6MW1KxxH