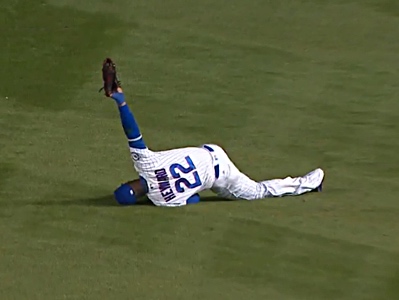 Jason Heyward isn’t bound to numbers, but would likely be pleased if he simply glanced at his defensive metrics.

“I don’t look at numbers,” said Heyward in a recent Sunday Notes piece from David Laurila at Fangraphs. “I never have looked at numbers. In the outfield you control what you can control. You pay attention to who’s hitting and who is on the mound. Those details alone will tell you where you need to be. I go off my instincts.”

Heyward added that he has always been allowed to position himself. And for what it’s worth, it has worked so well he has earned a Gold Glove in each of the last two seasons and three of the last four. Judging by the way he talks about knowing game situations with who is on the mound and at the plate suggests he is doing his homework one way or another.

Whether it’s his instincts or his positioning or his preparation or his athletic ability – likely all four – he showed off his tremendous work in the outfield last night on this catch:

Like @JasonHeyward was actually going to let that ball touch the grass.https://t.co/Nm2c71bPqs

Inside Edge provides a different kind of fielding metrics as it uses an old school eye en route to analyzing data as the company’s scouts watch every play from every team — twice.

After viewing the play, Inside Edge goes about measuring how often a player makes a play and from there is sorted in six different categories. This Wall Street Journal piece from July 2015 highlights what Inside Edge is all about.

Inside Edge shows Heyward does more than just make the routine plays. In fact, he makes challenging plays – like the one last night – more often than many of his peers. And nothing signifies that better than browsing through his defensive metrics from the last four seasons when he has been superb.

Heyward also leads in making plays categorized as “About Even” which are made 40-60 percent of the time. He has hauled in in 82.1 percent of those chances, which is remarkable considering the next closest players (Nick Markakis, Josh Reddick) have made those plays a respectable 65.4 percent of the time.

Of course, being able to make the spectacular plays isn’t what necessarily makes a great defender. Heyward also ranks highly when making plays sorted as “Likely” (60-90%) and “Almost Certain/Certain” (90-100%). Only Reddick has made more “Likely” plays (92.6%) than Heyward’s 92.4%, and Heyward is one of 11 right fielders who has made at least 99 percent of “Almost Certain/Certain” plays.

You can browse data from Inside Edge via FanGraphs’ sortable leaderboards here for more information on different players and positions.

I hesitate to draw strong conclusions about how such statistics will translate moving forward. However, it is nice to provide context to what Heyward’s defensive value has looked like in recent years, and what the Cubs hope it will look like in the years to come.