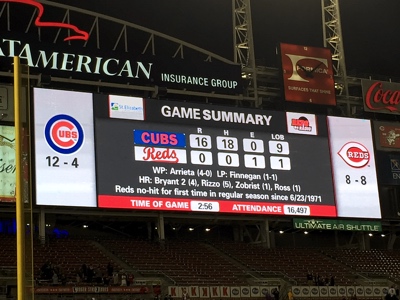 Then again, if you go to a Jake Arrieta start, you’ve got a near 20% chance these days, it seems – because the guy has now thrown two no-hitters in his last 11 regular season starts. Remember how many times he came so close (twice against the Reds, in fact) to no-hitters in 2014? Remember how we all said that this was a guy who was going to get one some day? Well now Jake Arrieta has two no-hitters, after no-hitting the Dodgers last year. And that’s so awesome.

I am supremely grateful to have been at that game, and that the weather held off. Even just one hour before the start, it was still pouring, and there were questions about how big of a window the teams would even get to start this one. Still, they started on time, and, not entirely unlike the balls coming off Reds hitters’ bats, barely a drop fell the entire game.

The atmosphere at the game was really interesting, as the game was poorly-attended thanks to the weather (and being a Thursday game), and was probably at least 50/50 Cubs fans. I was in a section behind the Cubs’ dugout, which was almost entirely Cubs fans, so watching the game unfold felt like being in a mini-Wrigley Field section.

The group started collectively anticipating the no-hitter after four innings, which was exactly when I started poo-pooing the idea in my head, because Arrieta was already over 60 pitches in the game, and it was clear that he didn’t have his best command. Getting through five more innings without allowing a hit in an efficient way just didn’t seem possible. And, indeed, Arrieta’s pitch count did get up there – 119 pitches – but, for the most part, he simply started putting the ball in the zone, and letting the Reds see what they could do with it. From my perspective, the answer was not much – although the Cubs did make some nice defensive plays, there was almost no hard contact in the game against Arrieta. Even if he wasn’t “unhittable” in the sense you typically think, he was absolutely un-hit-hardable. And, thus, the Reds got no hits.

By the 7th inning, everyone was hanging on each pitch, shouting at every ball in play to find a glove. Still, even as the Cubs’ bats made us wait so long between Arrieta appearances, the fans were all enjoying every hit, pulling for the Cubs to score more. Those were some long waits for Arrieta, too, which makes it all the more impressive that he continued to effectively bear down in the latter innings of the game.

OK, and, yes, it was special for me, both as a fan and as a writer. The fan in me will always take over in those moments, so I know I’ll do an inelegant job conveying to folks how it was to be there. Because I was just being there. Drinking it all in. However I’ll describe it in the years to come, I know I caught a glimpse of baseball heaven last night, and I don’t take it for granted.

I just want to say thanks to everyone who sent kind words about me being at the game – it was not something I was expecting, but there was an overwhelming volume of folks congratulating me on having the good fortune to be there. You all are way too nice. It’s better to be lucky than good. I wish I could have had all of you there with me. There would have been so many hugs.

If you missed the videos of the end of the game, do yourself a huge favor and check them out here.

All right. Enough from me. Enjoy some more stuff …

HOW DO YOU FEEL? pic.twitter.com/o3Rw1AIBYk

Longer video of the final out & celebration from Jake Arrieta's no-hitter, including the yahoo running on the field. https://t.co/aR9XpKRwxO