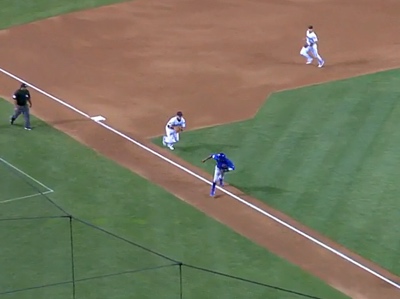 Welcome to the future.

In 2016, the Chicago Cubs are a very, very good baseball team. In fact, they are one of the best baseball teams in all of Major League Baseball. Their record (14-5) is just a half game behind the best record in baseball (Washington Nationals: 14-4), and their run differential (+64) is by far the most in the league.

But this doesn’t surprise you, does it?

With an offense run by Anthony Rizzo and Kris Bryant, a starting staff led by Jake Arrieta and Jon Lester, and a defense anchored by Jason Heyward and Addison Russell, it’s no surprise they’re among the best in those three categories. But there’s another category to consider, isn’t there?

How about base running?

Well, if you can believe it, that’s one more area of the game where the 2016 Cubs excel.

According to August Fagerstrom at FanGraphs, the Chicago Cubs are one of the best base running teams in all of baseball; however, it may be for a different reason than you’re thinking.

Flat out: it has nothing to do with stealing bases or avoiding double plays. While the Cubs are perfectly average at stealing bases in 2016 (14th best overall), that isn’t their claim to fame. If you thought they were doing well to avoid double plays, you’re mostly right (they’re 4th best in that), but that’s not their best quality, either.

Instead, the Chicago Cubs are leading the league in Ultimate Base Running (UBR). UBR is way of measuring how valuable a player (or team) is at efficient base running or runner advancement. In Fagerstrom’s words: taking extra bases while avoiding unnecessary outs.

As of Monday, April 25, the Chicago Cubs have an UBR of +3.4 (best in baseball). And although this Cubs team wasn’t the best in baseball last season, they are no stranger to being smart on the base paths. In fact, the 2015 Chicago Cubs were the second best base running team in the league. It appears that the addition of Jason Heyward (consistently a top five base runner) has put them over the top.

I’ll encourage you now to go check out Fagerstrom’s work at Fangraphs. He does an excellent job of describing just who is helping out the most and in what areas the Cubs are doing the best (they pretty much lead the league in every single important category). In addition to the thoughtful analysis, though, Fagerstrom adds some GIFs to highlight examples of the Cubs’ work on the bases.

This team was already among the best in several categories, but now, you can add running the bases to the mix.