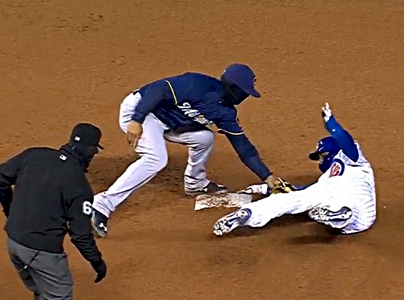 Remember last year in New York when Anthony Rizzo busted out an incredible, leg-manipulating slide at third base to steal a base he was totally not going to steal? Remember how it came immediately after the Cubs were entertained by a Joe-Maddon-acquired magician?

Thus, we got to have a whole lot of fun:

Well, Javier Baez took a page out of Rizzo’s book tonight, albeit using his arms for the magical deke … and then he added a physics-defying maneuver with his legs to somehow hold the bag and switch feet all in the same motion.

It was some serious matrix stuff:

More than that, Baez’s slide led to a fourth run for the Cubs … the deciding run in the game.