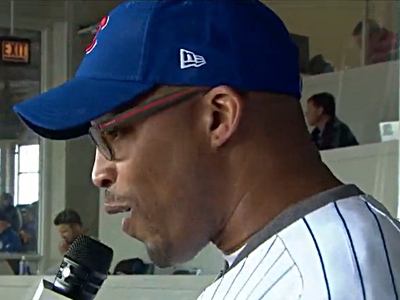 As I mentioned yesterday, I was traveling during the game and caught only bits and pieces. I did manage to follow the intense top of the 7th inning, when Jon Lester ate a bunt that loaded the bases, and then proceeded to strike out two and get a groundout to wiggle out of the inning unscathed.

I did not, at the time, catch what followed, but I imagine everything was just a little bit heightened because of the Lester moment.

And that’s why rapper Warren G’s rendition (not featuring Nate Dogg) of ‘Take Me Out to the Ballgame’ got a little extra scrutiny, and made folks chuckle at its shortcomings. I heard a lot about it after the game, so I figured I’d check the video out for myself.

Here’s when Warren G, of ‘Regulate’ fame, asked the crowd to mount up (literally):

That’s really not that bad, is it? Sure, there’s a good chuckle in there, but his miss at the start – “take me to the ballllllllgame” – is what set people on the wrong course, I think. From there, he was fine, albeit a little speedy. I mean, he root-root-rooted for the “Cubbies,” and implored the team to get some runs at the end.

(I told myself I would limit the lame ‘Regulate’ references to one. Sorry.)