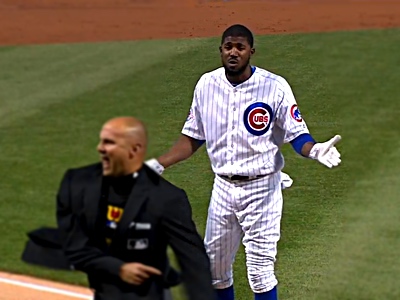 Dexter Fowler does not get especially steamed on the field. In fact, in general, he just seems like a really nice guy.

He also has an acutely strong understanding of the strike zone. In fact, some analysis suggests he’s among the very best in baseball at knowing the zone.

For the most part, that manifests itself in him swinging at pitches in the zone, and not swinging at pitches out of the zone. So then, sometimes, when he doesn’t swing at a pitch and it’s called a strike, he turns to the umpire and says a little something. The tone conveyed visually is almost always kind-looking. He looks to simply be asking a question about where the pitch was. It is not an issue, because, as noted, Fowler doesn’t get especially steamed.

Indeed, the guy has played in 965 career games, and he’s never once been ejected.

In his first two at bats last night, Fowler was called out on strikes. He didn’t appear to agree with either call – again, he knows the zone pretty well, so that’s not uncommon when he strikes out looking – and the second time he engaged the umpire in a discussion, and it ended in an ejection:

Look. You keep talking to the umpire like that at your own peril, but there was just no reason for Fowler to be ejected. You can see that he was talking, courteously, and eventually the umpire started shouting something to the effect of “no way,” either disagreeing with Fowler or telling him that he wasn’t going to have the conversation. Fowler probably should have let it go there.

But, still. The ump’s gotta have a muuuuuuch longer fuse than that. Fowler barely said anything else, was getting off the field, and the umpire re-engaged, and then ejected him. At the game, it seemed ridiculous, and on re-watching, it seems even more ridiculous.

After the game, Fowler explained the discussion as him seeking a clarification about the contours of the strike zone, wanting to know how it was going to be called in his later at bats (Cubs.com, CSN). The home plate ump, Vic Carapazza, essentially told him he wasn’t going to answer. Fowler asked again, and you can see in the video that Carapazza got frustrated, and that was that.

For what it’s worth, I checked at Brooks, and Carapazza’s calls weren’t that bad. The first at bat, the strikeout pitch was way in the zone. No questions about it. In the second at bat, the strike three call was slightly above the zone, but so close that it’s not the kind of call you’d independently ream an ump about.

So, then, maybe Carapazza was justified in feeling uneasy about being questioned about his strike zone, when it was actually a pretty good zone.

But, the flip side of that is that it’s hard for me to watch that video and not feel like there was a much better way to handle that than walking away, shouting “no way” over your shoulder, and then ejecting a guy. It doesn’t seem like Fowler did enough to warrant an ejection.