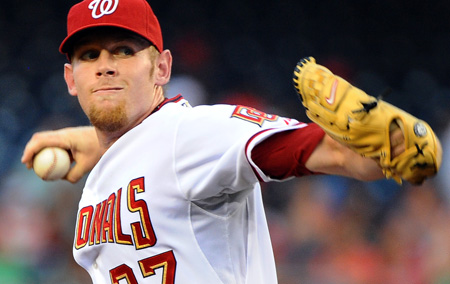 The stature of a given free agent class can change over the course of a season, and there aren’t too many safe bets when you’re several months or several years out. Players break out. Others regress. Others get hurt. And others sign extensions.

The upcoming class figured, based on all available information and reasonable expectations and projections, to be among the weaker ones in recent years. That was part of the reason the Chicago Cubs, for one example, were more aggressive in free agency after the 2014 and 2015 seasons.

One of the safe bets, though, about the upcoming class was that it would at least be headlined by one true top-of-the-rotation starter in the person of Stephen Strasburg. The 27-year-old righty is young and consistently good when healthy. Moreover, less than five months from free agency, he figured to cash in big-time. Plus, of course, he’s represented by extension-allergic agent, Scott Boras.

But, then, even safe bets are bets:

Stephen Strasburg has signed a "significant long-term extension" with the Nationals, according to a person familiar with the situation.

Stephen Strasburg's deal with #Nats is 7 years and $175 million, source confirms; present value is lower due to deferrals. @MLB

Strasburg has a "rolling" opt out, after years 3 and 4

It’ll take a little time to unpack the impact of this deal.

On a first glance, it’s a huge commitment – especially with the opt-outs – for a pitcher with Strasburg’s injury history, but then again, he would have certainly gotten an equal or better deal in free agency if he pitched well and healthily this season. With the deferrals, it’s possible the Nationals got an excellent deal here. And Strasburg, of course, gets security.

I know where your mind will go immediately, but I’ll say again that it’ll take a little time to unpack the impact. I speak, of course, about the Cubs’ current ace, Jake Arrieta, also represented by Boras, who’ll be a free agent after next season. The Cubs and Arrieta have frequently discussed an extension, but have been far apart on the years, with Arrieta openly wanting at least seven years, and the Cubs seemingly holding steady at something far shy of that. Arrieta turned 30 in March, but has a relatively clean injury history.

In any case, for tonight, the big news is that Strasburg is off the market, and will be with the Nationals for a while yet. The Cubs’ efforts to be aggressive in free agency before next offseason looks even smarter. They didn’t figure to be Strasburg pursuers, necessarily, but it’s nice not to have too many obvious when the market is so thin overall.