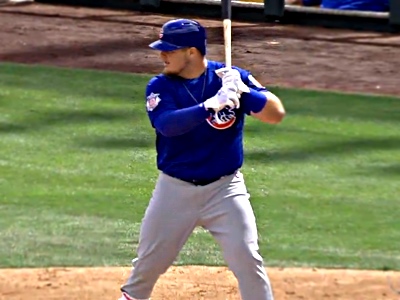 The big leaguers hit a couple homers yesterday – Kris Bryant and Dexter Fowler – but each was a solo shot, and the Cubs ultimately lost by two runs. A runner on base for each homer (which really isn’t a stretch, in the world of, “if only this had happened … “), and that’s a tie game. Just something to think about, as usual, when considering how close a given game actually is, and how flukey losses can be – even when it felt like Giants domination.

Anyway. The big leaguers weren’t the only ones going deep yesterday in the Cubs organization, and I wanted to highlight a couple notable bombs from AAA and AA.

First, you’ve got Dan Vogelbach, who, in addition to raking generally this year, seems to finally be seeing his big-time power show up in-game. Here’s the latest installment:

Earlier this year, we noted that Vogelbach, who’d always had an excellent hit tool and command of the strike zone, had seen his strikeout rate climb quite a bit at AAA in conjunction with a climb in his fly ball rate – the implication being that he was making a concerted effort to get the ball in the air more often, and take advantage of that power. Interestingly, while the strike out rate has come down (23.9% right now), his groundball rate has climbed up to such an extent that this season his groundout-to-flyout ratio is a whopping 2.15, by far the highest of his career. That’s pretty odd, and not advisable for a guy with his skill set.

Without some change there, I’m guessing the .386 BABIP is going to come way down, and with it, his overall line. Still, he’s taking his walks (14.2%) and the ISO is the highest of his career (.212), so there’s still a whole lot to like from his season so far.

Meanwhile, at AA Tennessee, last season’s biggest breakout offensive prospect (besides Willson Contreras) is struggling a bit. That would be Jeimer Candelario, who blew up at Tennessee in the second half last year, blew up in the Arizona Fall League thereafter, and then blew up in Spring Training.

His ice cold start has him at just .218/.337/.381 on the year, which is a far cry where you’d like to see the switch-hitter right now. There are some huge “howevers,” however. First of all, you’ll note from that line that he must be walking a ton (he is – 14.9%), and his ISO is still quite good (it is – .163). His strikeout rate is up a bit, but it’s still not especially high (18.3%). Furthermore, his wRC+ is actually 110, which means the numbers in the Southern League this year must be way down across the board for some reason. Finally, Candelario’s .257 BABIP is far below the numbers he put up in the last few years in the minors, and I suspect is reflective of some bum luck.

In other words, that’s all to say, I think he’s probably doing just fine, and we might see him take off soon enough, and warrant a midseason promotion to AAA.

Speaking of him taking off, here he is taking off on a grand slam:

Not the best video or audio quality there, but you can’t argue with the level of excitement. An 8th inning grand slam to cap off a huge come-from-behind win? That’s pretty exciting.