About That Bad Call on Javier Baez Skip to content 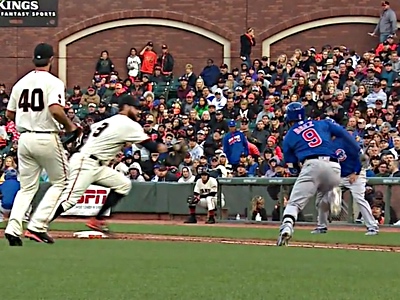 You rarely even notice that, halfway to first base, there’s a lane painted on the field, which is supposed to designate the area in which the runner must stay as he approaches first base. You don’t notice it because running outside that lane is basically never, ever actually used as the basis to call a runner out.

Last night, however, we noticed it in the 8th inning, because Javy Baez pushed a bunt to the right, veered to the right edge of that lane as he approached first base, and stepped just outside the lane as he slid to avoid a tag and simultaneously reach the base (VIDEO).

Baez was called out for going outside the baseline, which was not only a maddening call in a practical sense (that call is never made!), but also a horrible call by the rules on “Retiring a Batter”:

There’s a lot of fuzziness in that comment, and some room for argument, but I think the best argument is that Baez did not violate the rule because he stepped out of the lane as part of his process in reaching first base.

You could argue that Baez’s move outside the base path was not solely to reach the base, and was instead, primarily to avoid being tagged. I’d say that determining runner intent in the moment like that is not really a great practice to get into, and, in baseball, avoiding the tag on a play like that is inherently also about touching the base (before you’re tagged).

I would instead focus on the fact that Baez’s maneuver to avoid the tag (which took him one step outside the lane) was done in conjunction with his effort to reach the base. Guys slide at first base to avoid tags all the time – on a throw that takes the first baseman off the bag, for example – which means Baez’s slide there was the kind of normal baseball play contemplated by these rules. And the fact that the maneuver took Baez a step outside the lane is expressly permitted in the rules.

Baez pretty clearly should not have been called out.

Joe Maddon was appropriately furious with the call and came out to express his displeasure, but there was nothing that could be done about it.

It was a terrible call to lead off the 8th inning in a one-run game, and in an inning where the Cubs ultimately had another batter reach base. You never know what may have happened if Baez is correctly called safe to start that inning.

*(The rules on “Retiring a Runner,” which are not technically applicable, since Baez was the batter at the time he was called out, could also be viewed as instructive, since they are what most people think of when “running out of the base path” is called:

Rule 5.09(b)(1) Any runner is out when he runs more than three feet away from his base path to avoid being tagged unless his action is to avoid interference with a fielder fielding a batted ball. A runner’s base path is established when the tag attempt occurs and is a straight line from the runner to the base he is attempting to reach safely.

Once again, by that standard, Baez should not have been called out, since his whole body did not go more than three feet to his right at the point Brandon Belt tried to tag him.)