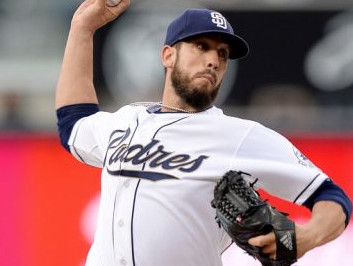 We’ve not yet reached June, but when it comes to the Padres and James Shields, strange timing happens.

Not only did the Padres sign the veteran righty to a huge, four-year deal extremely late in the offseason last year, but then they also were rumored to be shopping him at the Trade Deadline that very year (though his contract and scary performance at the time scuttled any chance for a deal). Strange timing, indeed.

Now, here we are less than a year later, and Shields has a 3.06 ERA (though similar peripherals to last year), and perhaps the Padres will find a taker.

To that end, Dennis Lin reports that there is “significant momentum” toward a deal that would send Shields to the pitching-needy White Sox, whose back of the rotation is looking quite ugly. Shields, 34, is owed $21 million this year, and then each of 2017 and 2018 (though he can opt out of the deal after this season – debatable whether he would).

Jon Heyman suggests that other teams have talked to the Padres about Shields, too, so it’s not quite clear that a deal with the White Sox is going to happen.

While I doubt the Cubs would be involved in talks for Shields at this point, based mostly on the contract situation and the Cubs’ full rotation, I do think there could be Cubs-related implications here. Even though the Cubs might not be in on Shields for those reasons, it is conceivable that they could be in on other Padres pitchers if they are shopped, depending on the timing. (As we’ve discussed before, there are strong arguments for the Cubs to still try and pick up a younger, multi-year pitcher, even if the rotation is currently full.)

There is, of course, long-time Cubs rumored target Tyson Ross, who might better fit the Cubs’ future plans than Shields, and whom the Padres might be more inclined to trade if they start selling off. The huge caveat with Ross, of course, is that he’s been on the DL all season with shoulder inflammation, a particularly unnerving affliction for a trade partner.

The Padres also have interesting lefty Drew Pomeranz, 27, who turned a corner last year with the A’s, and has posted a 1.70/3.00/3.68 ERA/FIP/xFIP with the Padres this year. He’s signed for just $1.35 million this year, and then comes with two more seasons of team control via arbitration. That’s a mighty intriguing target right there.

There’s no guarantee that the Padres will sell off, but dealing Shields at this point could push them toward a broader effort to unload. At 20-30, the Padres are already 10.5 games out in the NL West, and, even after Ross’s return, I don’t see enough production coming to put them in a competitive place this year.

This is something to watch.