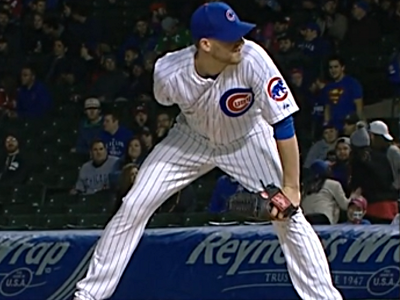 There are just too many rebuilding clubs in baseball right now.

No, I’m not lamenting competitive imbalance. I’m talking about the Chicago Cubs’ chances of getting reliever Neil Ramirez through waivers after he was designated for assignment 9 days ago.

Unfortunately for the Cubs, it sounds like Ramirez didn’t get too far up the waiver wire ladder before he was snagged, reportedly by the Milwaukee Brewers (Chris Cotillo). As a rebuilding club in the position to take chances on talent, the Brewers made plenty of sense for a Ramirez landing spot.

Although Ramirez never got his velocity back after a 2015 shoulder injury, there is still a chance he can become an effective reliever even without premium velocity. He hadn’t quite showed it with the Cubs, and, as a competitive team, their ability to hang onto a guy like Ramirez, who doesn’t have minor league options left, was reduced. The Brewers can afford to plug Ramirez into the bullpen and work with him this year to see if he can be a valuable piece going forward.

It’s also possible that the Brewers could try their own waiver wire dance to outright Ramirez to the minors, but I suspect there are several other teams, in addition to the Brewers, that would be happy to take a flyer on a guy who had previously looked as dominant as Ramirez did in 2014.

It’s a tough ending to Ramirez’s career with the Cubs, which flashed greatness. Hopefully he’ll find success down the road.

And it’s a reminder to baseball fans that things can chance so very quickly, both for individual players and for teams.