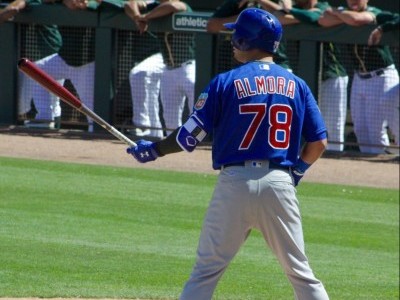 Much to the chagrin of Chicago Cubs fans everywhere, Jorge Soler left last night’s game with an apparent hamstring injury after his second hit of the night, frozen rope to left that would have been a double if he hadn’t pulled up lame rounding first. The long single improved his line to .318/.434/.591 in his last 17 games. Ugh.

Although Soler walked off under his own power, he’s dealt with hamstring injuries before, and, more to the point, even minor hamstring issues can lead to lengthy (i.e., at least a few weeks) absences. Nervousness is appropriate, even as Soler told ESPN this one felt less serious than the ones he suffered before.

But the Cubs, and hopefully we, will find out more today, as the outfielder will undergo an MRI on his left hamstring to determine the extent of the injury. When it comes to hamstrings, and when a guy has had hamstring issues before, there’s no sense in messing around (indeed, that’s exactly what Joe Maddon said last night as he headed to first base to remove Soler from the game, per Cubs.com).

You may recall that the man who replaced Soler in the game, Matt Szczur, dealt with his own hamstring issue earlier this year, and even though it was about as mild as these things get, he still missed 18 days (and actually returned slightly earlier than may have otherwise been desirable because of Jason Heyward’s time missed – yes, the Cubs’ outfield has been an infirmary this year). If Soler has to miss a few weeks and comes back healthy, that would be considered a win.

In the meantime, then, if Soler does have to go on the disabled list, who would replace him on the 25-man roster? Well, Munenori Kawasaki is a reasonable option already on the 40-man roster (since the Cubs will likely replace Soler’s spot in the outfield with Kris Bryant, moving Javy Baez and Tommy La Stella into greater starting roles, and opening up an “infield” spot on the bench). There’s also Arismendy Alcantara, if the Cubs were looking for a speed/defense guy (but then, that’s most what Kawasaki is, too).

In the outfield, the Cubs have several options at Iowa – Matt Murton, John Andreoli, Juan Perez, Kristopher Negron (IF/OF) – none of whom are on the 40-man roster, but that’s not really an issue. There are several open spots on the 40-man right now.

Oh, and there’s also that Albert Almora guy. Just 22 years old, Almora is hitting .322/.339/.450 in his first go at AAA, while playing his typically sterling defense. Being that he’s Rule 5 eligible after this season, he’ll have to be added to the 40-man roster eventually anyway. And, in a small dose, a little exposure to the big leagues could be a good thing for a guy like Almora, if he’s ready for that step. Furthermore, that defense – if nothing else – could really be impactful for the Cubs , even if the bat is not ready for the big leagues (the recent issues with plate discipline and the lack of power so far suggest it might not be ready).

Still, Almora would not have been my guess on a Soler replacement at this time, even in the short term. I very much believe being a starting center fielder in the big leagues is in Almora’s future, but I have expected him to spend most of this season at AAA Iowa, and then come up in September when rosters expand (and Iowa’s season ends), so he can get a little lower-leverage experience before 2017. If the Cubs had a short-term need in the outfield for a bench player, I figured it would be someone else for now.

But maybe I’m wrong, and that would actually be pretty fun:

Sounds like Albert Almora Jr., is a pretty legit candidate to go up if Chicago has to make a move. #Cubs #MiLB

If the #Cubs place Jorge Soler on the disabled list, look for Albert Almora Jr., to be the guy to go up. #MiLB

Based on those tweets, it looks like Birch – who is typically very solid on this stuff – heard a little something about Almora possibly being the guy, put it out there, and then immediately heard even stronger confirmation.

We’ll keep an eye on things today, but it looks like, as of right now, if Soler goes on the disabled list – which is the presumption, even if the MRI reveals good news, like a mild strain – Almora will be coming up.