Jason Heyward's Bat is Heating Up Significantly, In Case You Hadn't Noticed Skip to content 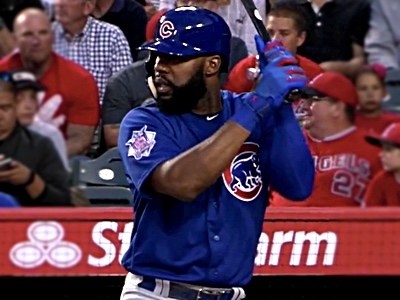 On Sunday, Jason Heyward started to make some serious noise. Or rather, he continued to make the noise that has managed to skate quietly by since the beginning of May.

Stepping up to the plate six times against the Atlanta Braves, Heyward reached base five times on the strength of three hits (including a double) and two walks.

I’d like to say that his big day at the plate was a pleasant surprise, but his performance on Sunday was but a part of a much larger upward trend that has been going on for a while. I mentioned it in the Series Preview earlier today, but Heyward has been legitimately great offensively. I bet you don’t realize how good he’s really been.

Although I usually like to work in the other direction, let’s begin with a look at his season as a whole, as Luis provided us with a nice jumping off point on Twitter earlier today (give him a follow):

Indeed, for the season, Heyward is hitting .240/.336/.346 with a solid 11.7% walk rate (2.5% points higher than last season), and a slightly elevated (for him, at least) 21.3% strikeout rate. That slash line is slightly underwhelming overall, but it has been in a straight ascent lately.

Consider, since May 5 (the beginning of the first Nationals series), Heyward has slashed .263/.351/.415. That’s good for a .337 wOBA and a 111 wRC+ (meaning that he’s been about 11% better than the average player at the plate). With his defense in right field, you’d take that as a final slash line at the end of the year, because that would be a really, really valuable player. But luckily, you don’t have to take that slash line. Heyward has actually been a lot better than that throughout his career, and, as it turns out, that has continued lately.

Check out his rolling 15 day wRC+ chart, courtesy of FanGraphs: Do you see that almost vertical line as late May turned into June? Yeah, that’s no mirage. Since the beginning of June (just a hair under 50 plate appearances), Heyward is slashing .325/.413/.600 with a .275 ISO. Considering the fact that power was the among his biggest concerns heading into this (and just about every) season, that is extremely encouraging.

Out of his thirteen hits in June, five have been for extra bases (two doubles and three homers). He’s walking a teeny bit less (10.9%) and striking out a bit more (26.1%), but the increase in strikeouts could be the result of an approach change that has allowed him to hit for all of this extra power.

And sure, his .400 BABIP in June is a fair amount higher than his career average (.308), but his BABIP before June (.281) was quite low, as well. Moreover, it can be at least partially explained by a heck of a lot more hard contact:

Before June, Heyward had been putting soft hits into play 31.5% of the time. After June, though, that’s shrunk by 10 percentage points. That is an enormous leap. But even more encouraging is that he traded all of that soft contact for hard contract. Before June, Heyward made hard contact just 19.2% of the time. After June that’s all the way up at 42.9%. That is a very legitimate reason for the elevated BABIP, the increase in power and for your current feelings of encouragement.

And as far as the power goes, Heyward’s added three home runs and two doubles in his last 46 plate appearances, after recording no dingers and just 4 doubles in the 99 plate appearances before that. How? We’ll he’s putting the ball in the air a bit more often lately, and with his big frame and natural talent, that has expectedly turned into very good results.

And again, it’s not just a mirage. We know from past comments from Cubs coaches and Heyward himself (but also from an extensive scouting history mentioning just this in the past) that Heyward’s biggest struggle has always been getting the ball in the air more often. He has natural power, but has always hit the ball down a bit too often to take full advantage of it. If he can continue to elevate the ball as he has been, this power explosion might be here to stay. It’s long been expected.

There’s a lot of baseball left in the season and Heyward is just starting to heat up. Hopefully – not unlike Dexter Fowler’s slow start last season – the early season struggles for Heyward may soon be forgotten. And remember, with Jorge Soler and Kyle Schwarber out right now, this couldn’t be happening at a better time.