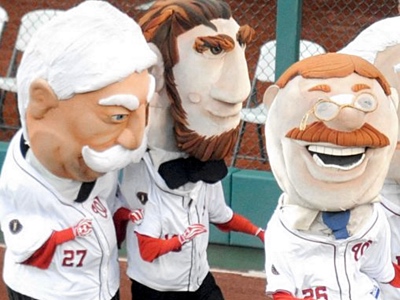 The Chicago Cubs are about to enter a relatively trying stretch of baseball. Over their next nine games, they’ll face their two biggest competitors in the NL Central (the Pirates and Cardinals), as well as one of most likely playoff foes in the Washington Nationals.

They do have a commanding lead in the Central, though, and probably shouldn’t even be thinking of the playoffs just yet anyway.

So remember to keep in mind how early in the season it is, when we come out on the other end of this stretch. Whether the Cubs do the dominating or get dominated, or more likely something in between, there’s plenty of baseball left.

The Cubs (43-18) have now won six straight series, dating back to the Cardinals series on May 23. They’ve won each of their last two games, and are 7-3 in their last ten. The last time the Cubs met up with the Nationals, they swept them in four straight games. Since that series the Cubs have gone 19-12.

The Nationals (39-24), are fresh off a series sweep in Philadelphia and have now won three out of their past four series, overall. Their record is second only to the Cubs in all of baseball. They have been a very hot team. They are also 7-3 in their last ten games and have gone 20-12 since getting swept by the Cubs. This will be a very good matchup.

It’ll be the back three of the Cubs rotation this week against the Nationals, but as you know, those back three have been quite strong. In particular, John Lackey has been all kinds of impressive. After a slow-ish start out of the gate, Lackey has turned into a legitimate force in the middle of the rotation. I gave him heaps of attention on Friday in a dedicated post of his own, so instead of retreading everything I said, I’ll just point you in that direction and leave you with the fact that since May 11, John Lackey has a 1.30 ERA.

Hector Rondon’s triple slash line (ERA/FIP/xFIP) is still entirely under 2.00 for the season. He’s already been worth 0.6 fWAR, given up just 3 earned runs and has walked just 2 batters (compared to 29 strikeouts) in his 20.1 innings pitched. Pedro Strop continues to be an excellent set-up man, and is starting to be slightly undervalued, I suspect. Because, aside from Rondon and Strop, the Cubs bullpen’s underlying performance hasn’t been quite that strong. Aside from Rondon, Strop, and Clayton Richard(?), no reliever has an FIP under 4.00. That’s … not good.

Not unlike a few weeks into Jorge Soler’s hot streak, I’m very excited to relay some encouraging statistics from the past few weeks of Jason Heyward. Since the beginning of June, Heyward has been scorching hot. In just about 50 plate appearances, he’s slashed .325/.413/.600 with three home runs and two doubles (.275 ISO). I think we all knew he’d eventually turn it around, but this has been an abrupt and welcomed turn of events. In fact, even going all the way back to the beginning of the last Nationals Series (May 6), Heyward has hit a perfectly solid .267/.356/.422 (.342 wOBA, 114 wRC+). With Soler and Schwarber out, he couldn’t have timed it better.

Addison Russell is having something of a rough go of it, though. Since the beginning of June he has just a 6 wRC+ and a strikeout rate over 31%. It’s not the largest of samples (32 plate appearances), and everyone goes through stretches like this, but I am anxious to see him turn it around.

The Cubs may be heading into the series with the back of the rotation, but the Nationals are not returning the favor. From Monday to Wednesday, they’ll send Max Scherzer, Gio Gonzales and Stephen Strasburg out against the Cubs in what appears to be at least two unfavorable match-ups for Chicago.

In his last two times out, Scherzer has been nails, too. Over 15 innings against the White Sox and Phillies, Scherzer allowed just 10 hits and 2 earned runs, against 3 walks and 17 strike outs. Neither offense is among the best in the league, but those are some dominating numbers.

And then there’s Stephen Strasburg. Although his season numbers are pretty great (3.03 ERA, 2.75 FIP), he has been roughed up a bit his last two times out. In two starts against the Phillies and Reds, Strasburg has allowed 7 earned runs on 9 hits and 3 walks over 12.1 innings pitched (5.11 ERA, 3.76 FIP). That said, he struck out 20 batters over that stretch, while walking just three, so maybe he’ll still be a fairly big challenge for Cubs hitters.

It took me 1000 words to get to Bryce Harper, but I’m finally here. How could I not discuss him? Harper is at an even 250 plate appearances on the season, slashing .258/.412/.511 (.380 wOBA, 138 wRC+) overall. Although that is not what he was doing last year, it’s still really, really good – he still has a walk rate (20.8%) greater than his strikeout rate (17.2%). But, since the end of the Cubs series, Harper is slashing just .250/.390/.380 while getting a lesser version of the Barry Bonds treatment. He’ll have to learn to take advantage of the pitches he does get, though, if he hopes to re-enter Bonds status. Getting on base that much is great, but he can do so much more damage overall. Somehow, I expect he will figure it out.

I’m really looking forward to this series and coming week, even if I’m the slightest bit nervous. Just remember, there’s a long way to go.