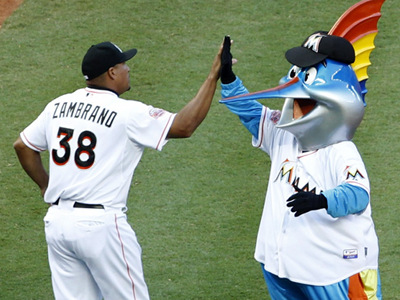 The Chicago Cubs are heading to sunny Miami, Florida this weekend and they’re doing so in style … very short style.

The week was a bittersweet one, though, with sweeps heading in both directions and multiple players being injured, but overall you have to be happy with where the Cubs are at.

Still, I can’t believe that, at one point or another, the Cubs have played without each of Anthony Rizzo, Jason Heyward, Kyle Schwarber, Jorge Soler, Dexter Fowler, Miguel Montero, Tommy La Stella, Matt Szczur and Javier Baez. That’s literally an entire lineup. To be fair, the Cubs have replaced those players with talented prospects, but it’s been quite the uphill battle. Let’s hope they just keep humming along.

The Chicago Cubs (47-23) split their home stand against the Pirates and Cardinals, with three wins to the former and three straight losses to the latter. Their 47 wins are no longer the most in baseball. They’re now tied with the Texas Rangers and are just one win ahead of the the San Francisco Giants. That said, they are three and four games ahead in the loss column to each team, respectively, so their .671 winning percentage is still the best in baseball (whew! that was a close one).

The Miami Marlins (38-33) have been something of a pleasant surprise this year, currently five games over .500. Although they’re in third place of the NL East behind the Nationals and Mets, they are just a game out of the second Wild Card. There’s a chance they can compete all season long.

*There are a lot of question marks in (predicting) this lineup, right now, especially if Anthony Rizzo gets a day off, as expected. With Rizzo, Miguel Montero, Jorge Soler and Dexter Fowler all experiencing different levels of injury right now, expect to see plenty of Javy Baez, Chris Coghlan and Willson Contreras over the next couple of weeks.

With apologies to the rest of the Cubs staff, who has been excellent, I’m going to give the attention once again to Kyle Hendricks. The Cubs 26-year-old right-hander is having such a great season, and has kept his ERA under 3.00 for a while now. His last time out, he gave up just 1 earned run on 7 hits over 6 innings while recording 12 (!) strikeouts and 0 (!) walks. His ground ball rate (54.0%) is 11th best in baseball and, as I wrote after his last start, his soft hit rate (29.0%) is the best in baseball.

In fact the entire Cubs staff continues to be excellent, and appears to have the upper hand in almost every matchup this weekend, until Sunday (Jason Hammel v. Jose Fernandez). Although, that’s not as much of a ding on Hammel as it is a compliment to Fernandez who has been really, really good this year (more on that in a bit).

Although Hammel has the sparkling 2.55 ERA, his peripherals (3.82 FIP, 4.20 xFIP) continue to climb week after week and he’ll continue to get bit by regression as long as that’s true. In his last four starts, for example, Hammel has just a 3.55 ERA (4.94 FIP) thanks (in part) to a well below average strikeout rate (17.2%). Hopefully he tightens up this weekend, because Sunday looks like a tough one.

There’s been some turnover in the Cubs lineup (and bullpen) lately, with each of Albert Almora, Willson Contreras and Chris Coghlan making their debut or return to Chicago. So, let’s take a look at the new guys and see how they’ve been doing since donning the Cubbie blue in 2016:

So, you can say they’ve been doing pretty well. Almora has been excellent and has already taken two walks, Contreras has already hit two home runs in his small opportunity, and Chris Coghlan has been walking (19.2%) like it’s his job … because, well, it is! The new guys get an A+ so far.

The Marlins pitching staff, as a whole, has been middle of the pack this year (6.8 fWAR), thanks in no small part to the heroics of Jose Fernandez (3.3 fWAR by himself). The oft-injured starting pitcher has already exceeded his inning count from last season and is working on something special. Through his first 14 games, he’s got a 2.36 ERA, supported by an even stronger 2.04 FIP. He’s striking batters out at an alarming pace (36.8%) and walks just the right amount (7.9%) to elicit true fear. His last time out against the Braves, he allowed no earned runs on just 1 hit, 2 walks and 7 strikeouts in 7 innings pitched. He’s good. Sunday will be a hard earned win.

That said, two of the other three pitchers the Cubs will see this weekend have ERAs above 5.00 and the third is knocking on the door of 4.00. The *best* strikeout rate of the trio is just 19.2% from Wei-Yin Chen (who just allowed six earned runs in 2.1 IP against the Rockies his last time out). This is a beatable staff and a winnable weekend, even though the Cubs’ offense is banged up.

The Marlins have been held above water, though, by center fielder Marcell Ozuna (.323/.375/.571; 15 HR) who’s been excellent this year and Christian Yelich (.311/.398/.483) who’s not far behind. If Stanton was cruising as he usually does, this offense would be downright terrifying. Perhaps it still is. Let’s see what the Cubs can do with it.