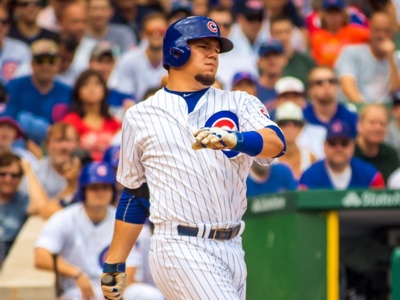 That the Chicago Cubs are all in for 2016 is no secret. Not only are they having one of the best seasons in team history, they are as set up for short-term success as they may ever be.

But being “all in” is a pretty meaningless phrase, in and of itself. What it means in reality is that the Cubs are going to do their best to improve perceived areas of weakness and fortify against potential areas of regression here in 2016.

Among the most widely discussed and expected areas for improvement on the North Side comes in the bullpen. We’ve already been heavily tracking the Cubs reported interest in the Yankees trio of relievers, but there are plenty more available arms throughout the league (let alone other areas of need on the team). Although we’re fairly confident that the Cubs are going to make a move for some quality midseason reinforcements (for the pen or elsewhere), we’re far less certain about what (or rather, whom) they’re willing to give up.

According to Jon Heyman, the Cubs are not looking to move any of your favorite young MLB names this season, but still expect – and are expected – to receive quality players in return.

At Today’s Knuckleball, Heyman writes that the Cubs have no interest in trading any of Willson Contreras, Javier Baez, Kyle Schwarber, and probably Albert Almora, too, at this point in time. But, despite what other teams, their fans, and their beat writers might lead you to believe, does that surprise us that much? Let’s consider each individually.

First, you have a 24-year-old Willson Contreras. In another life, another team, another year, he might not be an untouchable player. While he’s expected to be very good (and he looks that way already), he’s not in the Kris Bryant/Addison Russell tier of “Yeah right, keep dreaming.” That said, not only does he figure prominently into the Cubs’ catching plans from 2017 and beyond, he is needed in Chicago right here and now. Other than Contreras, the Cubs have a 39-year-old David Ross and a struggling Miguel Montero. I’m not sure there’s many deals out there for Willson Contreras – at all – that would make much sense for the Cubs, given how important he is to this very season. Robbing Peter to pay Paul, this would be.

So what about Javier Baez? Aside from Joe Maddon’s pretty clear affinity for Javier Baez, how could the Cubs possibly trade him this year, and expect to get much better in the process? He may not be a starter right now, or figure as prominently into the Cubs future at any one position like Contreras, but I’d argue that Baez has been uniquely valuable to the Cubs this season, given his versatility. The Cubs are, right now, playing without Kyle Schwarber, Jorge Soler, Dexter Fowler, Tommy La Stella and Anthony Rizzo. Given that Baez can theoretically cover each and every one of their spots (and has been working towards that goal already), with solid defense and offensive upside, I’d say he’s not going anywhere right now either.

Albert Almora Jr. sure feels like the most movable piece in theory, given the Cubs crowded outfield and his slightly lower ceiling, but is anything I just said true? The Cubs outfield is missing three players right now, including their starting center fielder, so how crowded is it? Dexter Fowler isn’t expected to miss a lot of time, but he isn’t likely coming back after this season. In addition, after 2016, Jason Heyward is only obligated to stay in Chicago for two years, before having the option to opt out of his contract. Keeping Almora and his gold glove defense around for 5-6 more years seems like a fairly prudent move, especially given the defensive limitations (in terms of outfield placement) of Schwarber and Jorge Soler.

The Cubs may trade Kyle Schwarber at some point in his career, but it won’t be now and it won’t be for 1-2 years of a reliever. I promise. I’m not giving you more than that, because I don’t want to lend any more credence to rumors that suggest 5+ years of Kyle Schwarber is worth a relief pitcher. It’s not happening. Fret not.

So where does that leave us? Who would the Cubs trade while still expecting to receive quality pieces in return? Well, according to one rival executive (via Heyman), “Just second-tier guys.” What that means, though, is pretty relative. By second tier guys, do they means second tier prospects, or top prospects that are playing the role of “second tier” to the youngsters in the Major Leagues? I’m guessing it’s the latter, especially given the comments from an unnamed rival GM who claimed that the Cubs should still be able to get what they need.

What the Cubs need may be little in terms of amount, but not in terms of quality. If the club’s one and only weakness were the bullpen, then they wouldn’t necessarily need a lot, but they would need quality. With that said, the only way to get quality pieces is to also give them up in return. That means that the upper tier prospects (guys like Gleyber Torres, Ian Happ, Jeimer Candelario, etc.) may not be off limits in the right deal.

In a separate piece at Today’s Knuckleball, Heyman echoes that sentiment in the Cubs segment of his notes for every team. More specifically, he mentions that Dan Vogelbach appears to be very well liked by many other teams – perhaps even more so than he is by the Cubs – and that he, along with Jorge Soler and Jeimer Candelario could be moved in a larger deal for some pitching help.* And to your immediate thought, I am also not sold on the idea that the Cubs are interested in moving Jorge Soler right now, either, especially given his upside, the hot streak just before his injury, and the Cubs current needs in the outfield.

I am fully prepared (and you should be, too) for the Cubs to give up pieces that make you bite down and cringe, in order to get the type of return they’ll need. But they won’t do so at the expense of this very season. That’s counterproductive. How exactly they’ll pull that off is yet to be seen, but I have faith in their abilities. It should be a very exciting month and a half until the August 1 trade deadline.

*[Brett: Michael and I are aware that Heyman also proposed a specific Cubs-Braves trade in that piece involving those three players, and you may feel free to discuss as your leisure. But, given the speculative nature of that section and the unlikelihood of that particular trade proposal, we did not find it worth extensive discussion here, especially when the rest of this post merited the much greater focus.]