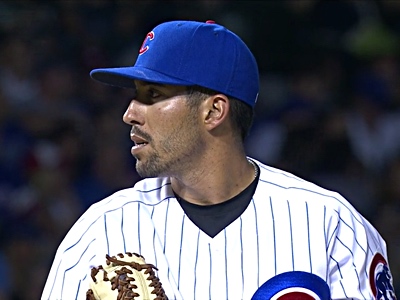 Lefty Gerardo Concepcion’s stay in the big leagues was a short one.

After a debut that netted 1.1 innings of good results (but also a little nervousness about the actual performance), Concepcion was subsequently hit very hard, and was not especially effective in getting out of the jams into which he was inserted. He never quite had an easy task, but, nevertheless, the early returns were not great.

So, then, it seems the Cubs have decided to send him back to AAA Iowa, per the team’s transactions page and 25-man roster. (h/t to the CCO for first noticing the transaction show up on the log)

The team has not officially announced the move, nor has a corresponding move been announced.

Clayton Richard, a fellow lefty reliever, whose spot on the roster Concepcion effectively took after Richard was placed on the DL with a blister/nail issue, is headed to AAA Iowa for a rehab assignment, so it wouldn’t seem that he’ll be coming back just yet.

It’s possible the Cubs are going back down to seven relievers and will bring back a positional player, but with Tommy La Stella, Dexter Fowler, and Jorge Soler all needing more rehab time before returning, I don’t think a positional player will be coming just yet.

Instead, it seems more likely, especially during this long stretch of games with no off-day, that another pitcher is going to get a chance in the bullpen. Lefty Giovanni Soto is on the 40-man roster already, but he’s struggled badly with control at AAA Iowa. The 40-man roster stands at 39, so there’s room to bring up an arm even if it’s not someone already on the 40-man roster.

Among the other options at AAA Iowa, there’s recently-signed veteran Joel Peralta, who has been solid through five appearances (UPDATE: Peralta it is). Felix Pena has become a strikeout machine since a move to the bullpen. Armando Rivero has always had killer stuff, but control issues. And Corey Black has been dominant since his promotion to AAA. Once he harnesses the control, he’s always looked like a future big leaguer. (A recent Black tweet could be suggestive that he’s the guy getting the call, but, as usual, I’ll caution restraint when reading too much into player tweets. (UPDATE: Sure enough, Sahadev Sharma indicates it’s not about a call-up. This is why I caution restraint!).)

It would make some sense to give one of those three a look right now, much like the Cubs just did with Concepcion (and are still doing with Spencer Patton and Carl Edwards Jr.), so that the organization is in a better spot to proceed at the August 1 Trade Deadline with a stronger sense of what they’ve got and what they don’t.

Speaking of which, Joe Nathan started his rehab assignment with a great first outing at AA Tennessee, but he’s not realistically expected to be available until after the All-Star break. He’ll get a shot in the big leagues when he’s ready, but that time is highly unlikely to be just yet.

Keep your eyes peeled today, because it looks like a new player will be joining the team this evening in Cincinnati.