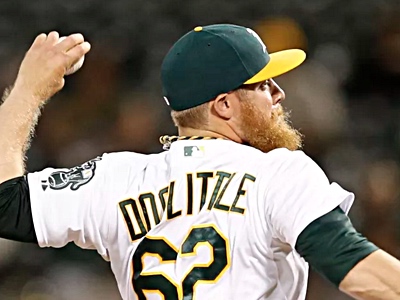 I’m not trying to berate the Cubs’ crop of relievers by any means, but to say there have been some struggles and serious turnover lately would be an understatement.

These troubles aren’t uncommon or unique to the Cubs, who are still very good overall, but that doesn’t mean they won’t work toward ameliorating the troubles in the coming weeks and months. All of which is to say, the Cubs will probably look to bring in an external arm for the bullpen (via trade) before the August 1 non-waiver trade deadline, and there’s a good chance that arm will come from the left side.

We’ve already discussed the Yankees duo of lefty relievers a lot, but who else is out there? Well, one potential option is Sean Doolittle.

According to Ken Rosenthal at Fox Sports the chatter about Doolittle has already picked up: “The Athletics are drawing trade interest in Doolittle, sources say, and the demand for him will rise even higher if the Yankees refuse to trade their own left-handed relievers, Aroldis Chapman and Andrew Miller.” To be quite clear, the purpose of Rosenthal’s article is that the A’s should not unload guys like Doolittle, but that part is just his opinion of a piece that he otherwise sees as very available.

The Oakland Athletics, you’ll note, are 16.5 games behind the Rangers in the AL West and are usually quite fond of extracting value from valuable pieces in years that seem lost. Sean Doolittle, 29, could be such a piece.

So what’s Doolittle all about?

Well, Doolittle was selected by the A’s in the first round of the 2007 MLB Draft and was a top prospect while he worked his way through the A’s system. He was eventually called up to the Majors in 2012 and has pitched out of Oakland’s bullpen ever since. He is perhaps best known for his ridiculous 2014 season, in which he struck out 37.7% of the batters he faced, while walking just 3.4%.

For his career, Doolittle has a 3.02 ERA, with exciting peripherals (2.46 FIP). In fact, before being injured at the beginning of last year, Doolittle posted three straight seasons with 1.6 WAR or better. In 2016, he still looks to be quite good, even if his results (2.93 ERA) are a bit stronger than the numbers behind them (3.77 FIP). Through 30.2 innings pitched, Doolittle has an excellent 28.9% strikeout rate with an equally solid 6.6% walk rate. Moreover, he’s been downright dominant against lefties (.202 wOBA).

That said, Doolittle isn’t just a LOOGY. In fact, for his career, Doolittle’s wOBA against righties (.259) is also quite impressive. In other words, righties hit him better, but they don’t hit him well.

Doolittle did begin the 2015 season on the disabled list with a shoulder issue – only throwing 13.2 innings in the Majors – but has come back healthy and strong in 2016.

Given his extremely affordable contract, relative youth, talent, and control, Doolittle would be an excellent target for the Chicago Cubs, but probably a bit of an expensive one. There haven’t been many rumors discussing what it might take to get Doolittle, but I suspect we will continue to hear more in the coming weeks. For now, he’s a good guy to keep on your radar, because he seems like a potentially solid target for the Cubs, especially if the Yankees wind up not selling.