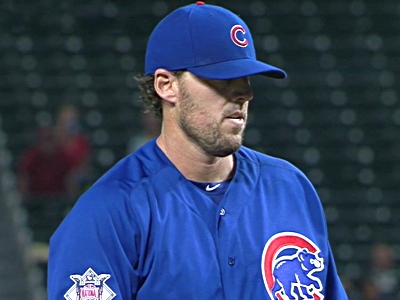 Danny Salazar, a one-time rumored trade target of the Cubs, has blossomed into an ace with the Cleveland Indians because of a pitch that ranks as the best in baseball by one metric’s standards.

But quietly, a Cubs pitcher is right behind him, and his identity, and the pitch, might surprise you. Hint: he starts tonight in the series opener against the Mets.

Over at ESPN, Mark Simon noted that Salazar’s changeup graded out as the most valuable pitch in baseball (among pitches that a pitcher throws regularly) with 4.96 runs saved per 100 pitches thrown. Salazar’s change has been so filthy, opponents are only 8-for-68 (.118 average) against it this season.

And that makes the fact that John Lackey’s slider ranks as the second best pitch in baseball stand out in a group of great pitchers and pitches.

You can check out the rest of the top-five (and more on Salazar, if you’re so inclined) here.

Lackey’s slider, which came with a 4.47 runs saved per 100 pitches at the time of the original post (the figure is now 4.07, but is still the second best among regularly-thrown pitches), grades out better than Jake Arrieta’s slider, Jon Lester’s cutter and Kyle Hendricks’ changeup – all of which are plus offerings on a per-100-pitch basis per FanGraphs.

The 37-year-old free agent signing has had incredible success in his first few months with the Cubs. Lackey’s slider is one of the main reasons he has newfound success this year, as opponents are batting .114 and slugging .124 with an ISO of .010. [Brett: Note, all stats are through Lackey’s previous start against the Cardinals. The unfortunate realities of our publishing schedule prevented this post from going until today, at which point Lackey had made another start … one that didn’t go well. The principles discussed by Luis, however, all still stand.]

However, what might be most notable about Lackey’s year is his ability to miss bats. Lackey’s 26.6 strikeout rate would be a career best and would represent his best showing since 2005 when he struck out 22.3 percent of hitters. He has also seen his swinging strike rate (which is at 9 percent over the course of his career) climb up to a career best 12.2 percent.

The slider and its effectiveness seem to be an important part of this trend.

According to BrooksBaseball.net, Lackey’s peak slider usage came in 2013, his first year back from Tommy John surgery, when it was thrown 29.24 percent of the time. And while has that number has come down since (it currently sits at 22.36 percent), the whiff percentage has gone up. In fact, Lackey’s slider has seen an increase in whiff rate in each of the last three years, with a 25.57 percent whiff rate coming this season.

On top of that, the pitch has kept its swing-and-miss nature later in games, evidenced by a 30.61 percent whiff rate the third time through the order and later.