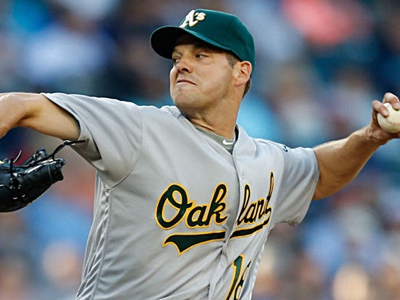 According to the San Francisco Chronicle, when Oakland A’s lefty Rich Hill returned to the mound this weekend for the first time in a month after a groin strain, there were a number of scouts in attendance to see how he looked. That list included representatives from the Chicago Cubs, among many other teams.

On the whole, those scouts saw Hill looking pretty much like he’s looked since he reinvented himself as a successful starting pitcher with the Boston Red Sox last year. More about that in a moment.

Your obligatory, up-front caveats on a rumor like this:

(1) All teams are scouting lots of players right now (including lots of players on the same team, making it difficult to say for certain precisely whom they’re there to watch) for a variety of reasons and you read too much into it at your own peril; and

(2) Even if there is a trade interest involved in the scouting, smart teams like the Chicago Cubs are often doing so just to make sure they’ve covered all their bases in case a need or a deal pops up (as opposed to putting the finishing touches on a deal they’re already contemplating).

So, are the Cubs interested in trading for Rich Hill?

Well, I think the caveats really apply here, because there are other players the Cubs could be checking out (remember those Josh Reddick rumors? well, he’s back from injury now, too), and the need for a rental starting pitcher is not immediately obvious. But, in the even that the Cubs did develop such a need, it’s good to have your scouting ducks all in a row, just in case you have to make a quick decision.

There will be only so many starting pitchers available this trade season, and the last thing you’d want to see is the Cubs unable to make a trade – or worse, making a terrible trade – because a surprising need popped up and they were not in a position to feel comfortable making a decision.

The other thing to keep in mind: even if the Cubs were looking to add another starting pitcher right now, that, too, could have a positive impact on the bullpen, as it pushes everyone at the back of the rotation down a spot, and leaves open the possibility that one of the starters could help in the bullpen.*

So, then, without going too deeply into whether the Cubs are into Hill or not – we’ll wait for a specific rumor on that front, and I’ve not heard anything specific, myself – I just want to make sure and point out that he’s not the guy you might remember as an up-and-down reliever for a number of teams in the last half decade.

Hill, 36, is on a one-year, $6 million deal with the A’s, and he might be the best rental starter that becomes available. The price tag will probably be surprisingly steep, given the weak trade market, Hill’s cheap effectiveness, and the fact that any return the A’s get will have to be better than the draft pick compensation they might otherwise hope to get by making him a qualifying offer after the season.

*(Note: be careful in how you evaluable whether a starter would be effective in relief. It may be tempting to look at first inning stats for a starter and say he would or would not be good, but that doesn’t actually tell you much. For one thing, the first inning is the one in which you’re guaranteed to face the best hitters in the opposition’s lineup. For another, much more important thing, a pitcher uses his pitches far differently in the first inning of a start than he would if he knew he were simply going to pitch one inning in relief. The real questions are more nuanced, involving, among other things, whether a certain pitcher’s stuff can play up in small bursts, whether an ineffective third pitch can be ditched, and whether there’s a useable bump in velocity.)