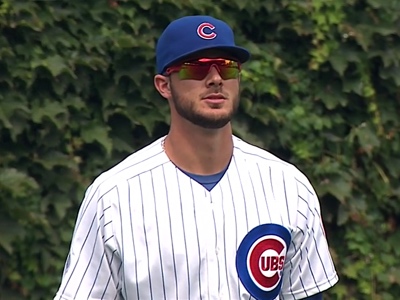 Kris Bryant, who’d already homered in the game, departed today in favor of pinch hitter Matt Szczur in the bottom of the fifth inning.

Before you immediately panic, know that: (1) at first, Bryant stayed in the game after colliding with Albert Almora on a catch in the outfield, and (2) the Cubs were up 8-0 when he departed.

Outside of that, we don’t know much. Bryant and Almora were both going for a ball in left center field, collided, and Almora’s glove appeared to hit Bryant’s head. There may have also been some lower body involvement. It appeared as though Almora was calling for the ball, and it’s hard to tell if Bryant, at whom the ball was more easily headed, was also calling or not.

We’ll wait on official word from the Cubs before freaking out. I’ll also update with video when it becomes available.

UPDATE: Here’s the video of the play if you missed it. It didn’t look terrible, but it also looked bad enough to at least leave the guys banged up. Hopefully Bryant didn’t take a shot to the knee.

Kris Bryant exited today's game with a contusion on his lower left leg.

That’s a fancy way of saying a bruise, which is itself a euphemistic way of saying he got his leg hit hard enough to hurt. Hopefully it remains merely a bad bruise, which is not nothing, but is also know a structural knee injury. That’s obviously what you’d be worried about in any lower body situation, and, yes, Cubs fans are especially sensitive when it comes to outfield collisions and lower body injuries …

#Cubs Maddon says Bryant would have stayed in the game if it was close. Expect him back Tuesday

I’M GONNA GO BLOW UP SO MANY FIREWORKS OF HAPPINESS.