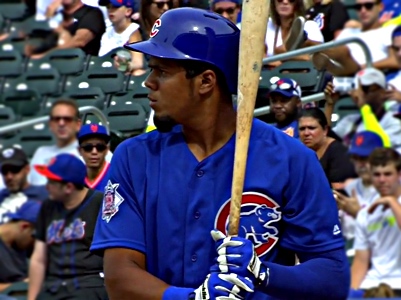 I’m not going to tell you I can find the silver linings in a 14-3 blowout loss that capped a four-game series sweep at the hands of the Mets. It was pretty much just bad, and the thing to do is simply hit the reset button. (And then take the cartridge out, blow in it, press it up and down in the system, take it out again, blow in it again, put it back in, and *then* press power.)

But I can tell you that there were a few moments of joy in yesterday’s loss, including the big league debut of third base prospect Jeimer Candelario, who struck out twice on just six total pitches in his first two at bats against Noah Syndergaard. Hardly a knock on the young man.

In his third plate appearance, though, he got good wood on a Syndergaard slider, and smacked his first career hit to right field:

He got to do that in front of family and friends – Candelario was born in New York – which made it all the more special.

It was also nice to watch Willson Contreras rocket this homer to left, already his fourth in the big leagues. Although the ball didn’t travel especially far, Contreras destroyed it: 108.4mph off the bat, according to the Home Run Tracker.

Between the big leagues and AAA, that’s already a career-high 13 homers for Contreras, and he’s done it in just 71 total games. Power often comes later for catchers – perhaps especially catchers who are converted there in their early 20s – so it’s not at all inconceivable to think power will be the next big step in Contreras’s game. He’s already got the plate discipline, contact coverage, and good bat speed.

So far in the big leagues, through 59 plate appearances, Contreras is hitting .294/.390/.588 while spending time behind the plate and in left field (with some time at first base sprinkled in, too).

And then, of course, the big fun yesterday came when catcher Miguel Montero was called upon to finish things out for the Cubs, and he did so with 1.1 innings of moderately effective sinkerball work. Lots of hard contact, but, hey, he saved the bullpen: