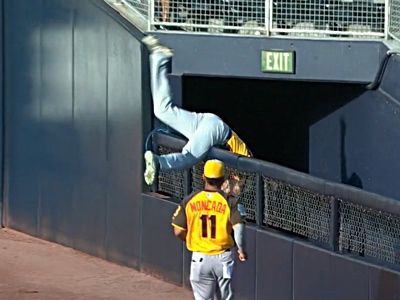 You know him because he was the biggest bonus baby in the Chicago Cubs’ big-time 2013 IFA class.

And you know him because he’s so impressively talented with the bat that BP just ranked him the 28th best prospect in baseball, and tops in the Cubs’ system.

But you do not know him for his outfield defense. That’s not necessarily because he can’t play outfield defense, it’s just that, when you’ve got the upside of his bat – potentially one of the best in all of minor league baseball – you’re rarely also known for your glove.

I can’t tell you that Jimenez’s glove will ever match his bat, but I can tell you that tonight, in the Futures Game, Jimenez did this:

Yes, you could question the route and the tentative approach, but let’s keep in mind that this is a young outfielder in a park that is foreign to him. I should *hope* he would take it easy!

And then when he got a real beat on the ball, he time his jump and made his play on the largest stage these players get right now. It was freaking awesome.

Also awesome? Yeah, that bat thing I mentioned. Jimenez also monster-homered and doubled in the game.