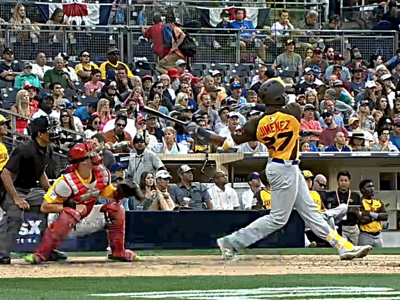 Chicago Cubs prospect Eloy Jimenez had himself a game yesterday.

Participating in the All-Star Futures Game, Jimenez, 19, put on a show that featured a run-scoring double, an absurd over-the-wall catch in right field, and a three-run homer that put the game out of reach for the World Team.

And it wasn’t just any homer. It was a mammoth shot, as he so often does:

That’s off the third deck of the building in left field at Petco Park, an area in play only for the most prodigious of blasts.

There’s a cool additional video of the homer, circling him in 360 degrees as he strikes.

Jimenez will resume his second half shortly at Low-A South Bend, where he sports a .332/.372/.527 line as a 19-year-old in his first full-season league. It’s no surprise BP recently ranked him the 28th best prospect in baseball.

Also, here’s what he looks like in batting practice: