Jason Heyward Unleashed a Ridiculous 98.9mph Throw to Nail a Runner at the Plate Skip to content 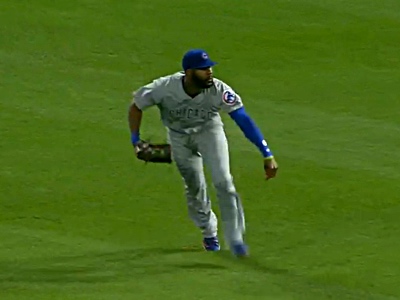 Jason Heyward might be going through plenty of ups and downs at the plate this year, but his defense has been juuuuuuuust fine:

That’s a two-out ball that died a bit in the outfield, with a runner going at second base. In no universe should that even be a close play at the plate, let alone what it was. Heyward nailed James Loney, and did it with some room to spare.

How? Well, a perfectly accurate throw, and this:

Not only that, it was Heyward's hardest throw of the Statcast era. https://t.co/jew7iCiw1g

Just silly. Probably better even than the throw he made against the Pirates that didn’t result in an out, but did result in my jaw dropping.