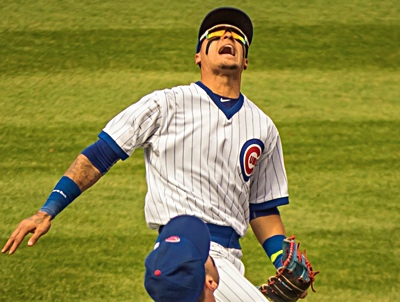 Javy Baez is no stranger to incredible defensive plays. Those three are just a handful of recent examples, but we could go back, and keep going back, getting more incredible plays. He’s a highlight reel.

He added another one to the vault in yesterday’s game (a game full of highlights), snagging the final out of Kyle Hendricks’ excellent outing with a running grab, crashing into the tarp:

The concentration that took, at full speed, to reach down and grab that ball right at the tarp is significant. Then to try and decelerate however much is possible in a fraction of a second, Baez did what he could to prevent his knees from getting wrecked. Thankfully, it seems like he did, since he stayed in the game.

Remind you of a certain Anthony Rizzo catch? Totally different grabs, of course, and Rizzo upped the difficulty by going on top of the tarp and into the stands. But still – tarp catches are all fun!

It was the kind of catch that yields great pictures, too:

Javy Baez goes over the tarp to catch a foul pop as #Cubs lead Mets 6-0 at stretch. Photos: https://t.co/xMnoLmt6Gd pic.twitter.com/Jx3q4FlW1i