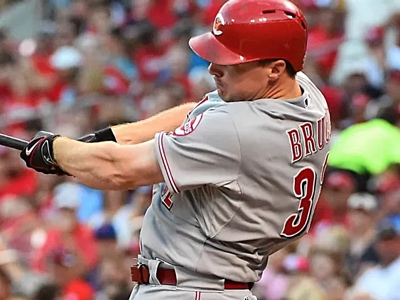 We’ve gone to some length explaining how it is that the Chicago Cubs could seek to trade for another outfielder – Josh Reddick – when they’ve already got a crowded outfield. Sometimes, you make the upgrades where they’re available, and a quality lefty bat to complement the rest of the outfield mix is not completely nonsensical.

There’s overlap in the Jay Bruce and Josh Reddick marketplaces; #Cubs, #Dodgers, #Indians are potential suitors for both. @MLBNetwork

My brow is furrowed. And in Morosi’s defense, he did say potential suitors. Not active suitors.

Bruce, 29, is under control through next season (via a $13 million club option), which is one immediate distinction I’d point out when it comes to how the Cubs would value the two outfielders. Reddick is a free agent after this season (which makes sense for a Cubs team that figures to add outfielders like Kyle Schwarber, Albert Almora, Willson Contreras (part-time), and Jorge Soler back into the mix next year). And although the Cubs wouldn’t be obligated to Bruce for 2017, that option on his contract would be of less value to them – I’d think – than other teams desperate for a power-hitting outfielder in 2016 and 2017. When there is a misalignment of value like that, it tends to be the case that other teams are willing to offer more.

Setting all that aside, there are some serious performance questions with Bruce. First, although he’s bounced back in a big way with the bat this year, the overall production (.263/.314/.530, 117 wRC+) is not so over the top that it makes you forget how underwhelming he was in 2014 and 2015. Fear that he could regress again is very legitimate.

Furthermore, Bruce rates so badly on defense that it completely eviscerates his value on offense. Maybe the metrics are too harsh on him, but they’ve consistently painted Bruce as one of the worst outfielders in baseball the past three years. And maybe things would look better for him in left field, but the Cubs aren’t going to ignore defensive considerations entirely, especially when thinking about adding to an already crowded mix.

I suppose this will be something to follow, but while I can make the case for Reddick and the Cubs, I have a much harder time doing it for Bruce.