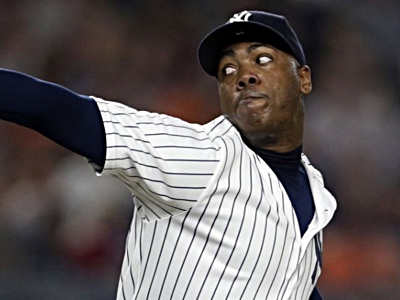 We’re in that time of the year where things can move and change fast and furiously – both because rumors are flighty, and also because discussions legitimately do move and change quickly among front offices – so I wanted to get this in front of you quickly, even if I’m not quite in a position to break it down in detail (I’m sitting on a sidewalk typing outside our gym).

Jon Heyman is updating his Aroldis Chapman rumors (briefly discussed this morning), noting that the Nationals are fading a bit, there’s an ever-present “mystery team” entering the mix, and the Cubs are “pushing hard” to get Chapman.

We’ll have to follow this closely, because there’s plenty of smoke: we know there’s an obvious need on the Cubs for an impact reliever, we know they’re not done trying to make moves, and we know they’ve got the pieces to get a deal done. We are also pretty sure the Yankees are going to deal Chapman at some point, and we also suspect it’ll be sooner rather than later.

UPDATE: Just a little bit more on the involved teams:

Sense is Giants aren't in final mix for Chapman. They'd love a late-innings guy, but not the right fit.

SFG beats saying they're out, Heyman says WAS trailing. Leaves Cubs, CLE & #mysterteam. Price is high & fans of acquiring team won't like it

It’s worth remembering that last part: even though Chapman is a rental, even though he’s a reliever, and even though he comes with some off-the-field questions, he’s pretty much as impactful as it gets when it comes to reliever rentals. The extent that he could affect a race and a playoff series is tremendous. Thus, the price tag is going to include a very well-regarded prospect/young player or two.

UPDATE 2: A couple new tweets would seem to suggest the Cubs may not be the favorites:

I heard Fedde, Glover, plus one more if he goes to the Nats, which is a lot. https://t.co/QhMxaXcBG7

MLB source- the Cleveland Indians have the best names on the table for Aroldis Chapman. Deal could be close Washington also very aggressive