The Qualifying Offer for This Offseason Will Reportedly Be $16.7 Million Skip to content 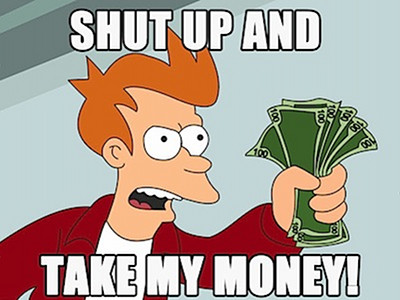 I’m mid-drive to Chicago, getting myself a little road ice cream, so you’ll have to excuse the brevity here. Still, and important note:

Sources: The current estimate is that the qualifying offer for MLB free agents will jump from $15.8m last winter to $16.7m this winter.

You may recall, the qualifying offer is the one-year contract offer that may be made to free agents after the season. If accepted, that’s the player’s contract for the next season. If rejected, the team that later signs that player must forfeit a draft pick (as the Cubs did for signing Jason Heyward and John Lackey). Further, the team that made the qualifying offer will net a compensatory draft pick when that player signs. The Cubs made a qualifying offer to Dexter Fowler this past offseason, but, of course, he wound up returning to the Cubs, so there was no pick netted.

This year, the Cubs will be able to make a qualifying offer once again to Dexter Fowler. If he keeps doing what he’s done so far, that’s a lock to happen, especially in this market. There’s a mutual option for 2017 on his deal, but it’s dirt cheap, and he’s not going to exercise his half of it. Whether the sides explore a longer term deal is a better question, but with Albert Almora Jr. just about ready to go and resources needed on the pitching side, I’m not sure there’s going to be a fit.

But, hey, we all said exactly the same thing last year at this time.

Aroldis Chapman will be the Cubs’ other major free agent, but he will not be eligible to receive a qualifying offer thanks to the midseason trade that brought him to the Cubs (only players who’ve been on a team all season can be given a qualifying offer). So, if and when Chapman departs, that’s that. There will be no draft pick.

This is all against the backdrop of an expiring collective bargaining agreement that, if put in place before the thrust of the offseason, could change these rules. Draft pick compensation is a hotly contested issue between teams and players, so I do expect the system to change in the next CBA. How, and when, though, remain open questions.