Report: Josh Reddick "Won't Be Going to the Cubs" Skip to content 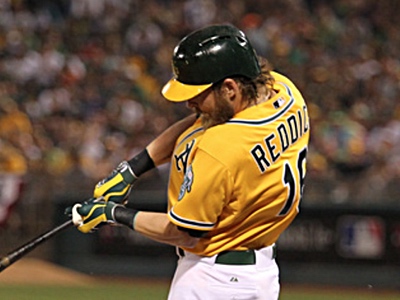 There’s not a lot of detail in this report, but we’ve been following Josh Reddick rumors quite closely, as it looked like he was the Cubs’ top positional target if they were going to make a trade.

something heard: reddick is not too likely to go to dodgers, wont be going to cubs

Given that “talks” have been reported between the teams, the implication of Heyman’s tweet is that the sides have not been able to come together on a price. There are a number of outfield bats on the market, so it would be something of a surprise to learn that the A’s demands on Reddick, a rental, were too outrageous. But perhaps they are far too high. The A’s can make Reddick a qualifying offer after the season if he’s not traded, so any offer would at least have to beat a compensatory draft pick.

If I’m reading between those lines correctly, it wouldn’t be a surprise if the teams couldn’t match up on a deal, given that Reddick sure feels more like a luxury addition to the Cubs than a necessary one. With Chris Coghlan just now returning and Jorge Soler on the way, the Cubs are already having a tricky time accommodating all the outfielders on the roster. That’s not to say there isn’t a setup where Reddick makes sense, but it does suggest that other teams out there in need of an outfield bat should be more willing than the Cubs to pay a steep price.

We’ll keep tabs on this and see if there’s any additional info trickling out on Reddick over the next couple days.