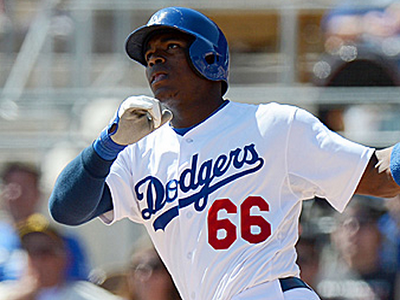 Things are starting trickle out more and more, and, although I’ll primarily be focusing for now on things that directly impact the Cubs, these are some notable bits:

The Mets are on the verge of finishing a deal for Jay Bruce.

Source: Nimmo to be part of Bruce to Mets, assuming it gets done.

It is Nimmo and 2 lower-level prospects for Bruce. #Mets #Reds

Nimmo is certainly an interesting piece of the pie for the Reds, and if his upper-level minors success translates in the big leagues (he’s 23), he could wind up a near replacement for Bruce in a couple years. We’ll see what the rest of the package is if and when it gets done.

From the Mets’ side, the addition of Bruce never really frightened me all that much. He can hit, but will he do as much damage to the Mets’ pitchers with his glove (especially since it will further force unqualified outfielders into center field *in addition* to Bruce’s own questionable defense)? We shall see. Perhaps the Mets are very concerned about Yoenis Cespedes’ quad injury and want to have Bruce in place no matter what. (UPDATE: Various reports indicate the Bruce deal is being held up, for now, by medicals on the Mets prospect side.)

Meanwhile, in a very different kind of possible trade:

The White Sox want Yasiel Puig if they make a deal with the Dodgers.

Some rumblings in recent days about a deal that could send Yasiel Puig to the White Sox for James Shields. @Buster_ESPN says CWS want Puig.

There’s some vague sense there, right? The money could wind up close to a wash, and the Dodgers desperately need arms at this point. Puig’s value is in the tank, though it would still seem he could net more than “bad contract for bad contract” swap. If the Dodgers deal Puig, it’s a good bet that they’d also pick up another outfielder in trade (Josh Reddick, perhaps?); things start to get complicated at that point, though.

And, despite extension rumors that always seemed bogus, Rich Hill is likely to be traded:

Source: No extension for #Athletics’ Rich Hill. Likely to be traded.

There’s this, by the way, which just seems odd to me unless Hill can be had for a song:

Rich Hill fascinates the @Cubs but there's not an obvious need for him. Could grab him anyway if blister/health concerns limit his market.