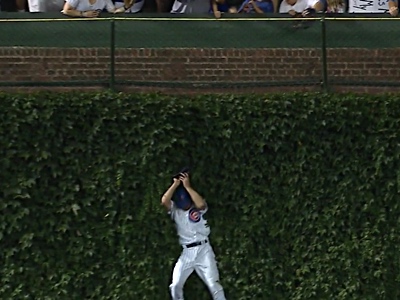 I am completing this post and publishing it from my current outdoor blogging location … standing in Lake Michigan. Wow it is cold.

If you went to sleep last night with the Cubs down 6-0 or maybe 6-3 in the 9th inning (after they’d stranded some runners in the 8th), I’m sorry to be the one to tell you that you missed an unbelievable Cubs comeback, and an even more unbelievable walk-off.

You’ll want to check out those posts if you weren’t up late last night.

Otherwise, you’ll also want to check out two incredible catches the Cubs made in left field in support of that comeback win … neither of which was made by the left fielder who started the game.

A catcher by trade (and the catcher to start last night’s game), Willson Contreras has already shown plenty of aptitude in left field, and he shined on this sliding grab when switched out there late in the game:

Contreras is a deceptively speedy guy, and he covered a ton of ground to get to that ball just in time to be able to set up his body for a sliding grab without slamming into the wall. Great catch.

Similarly, another left fielder in the game made a fantastic catch without slamming himself too hard into the wall … and it was pitcher Travis Wood:

Like Contreras, Wood is a fantastic athlete overall, so the fact that he can handle left field in a pinch is not a total shock. But to be able to track a ball like that one, getting to the wall to set himself up in time to make the grab while falling back into the wall? And not destroying his body? I bet half of the left fielders in MLB don’t even try to make that catch right there, instead settling for trying to play it off the wall.

Two incredible catches in left field by two guys who were not really “the” left fielder last night. Just another couple parts of a crazy game. Maybe the craziest I’ve ever seen.